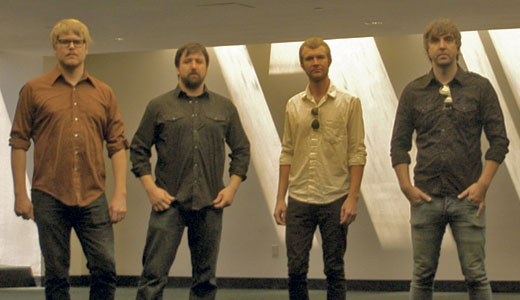 Give the drummer some

LEO: In the nearly three years since the tragic passing of (drummer) Jerry Fuchs, what have you learned about living life?

Coley Dennis: The most important thing I’ve learned through all of that is to live every day like it could be your last, tell your friends and family you love them, and do what makes you happy, because you might not be here tomorrow.

LEO: How easily did new drummer Mike Albanese mesh into recording with Maserati?

CD: We’ve known him for over 10 years, so when we were thinking of who to ask to interpret the drum parts from the demos, he was first on the list.

LEO: How was your experience recording with Kevin Ratterman?

CD: Kevin was working out of the church where he recorded the last My Morning Jacket record. The studio was set up next to the church in the house where the priests lived. It’s a huge old house, it felt like recording a Zeppelin record.

LEO: Did Kevin’s experience as a drummer bring anything special to working with Maserati?

CD: Kevin being a drummer definitely helped a lot. Like the drum solo in “Abracadabracab.” We had the basic idea that we wanted this Cerrone/Phil Collins-style drum solo section, but we were not sure how to do it. We mentioned the idea to Kevin, and he said, “Oh, I have some Ludwig concert toms that would be perfect!” We ran the cables in the sanctuary in this huge room. Mike did a bunch of passes of the drum solo, and we said, “Kevin, you should try a take, too, dude!” His eyes lit up, and he did a couple of takes. After that, we all did takes of the drum solo. It was pretty hilarious.