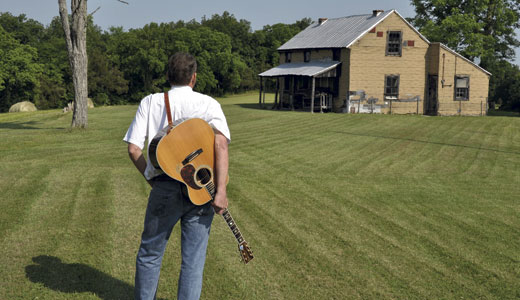 Tom Boone is “61, and trying to act like a teenager.” He grew up in Louisville (DeSales High, since you’re wondering), lives in Lebanon Junction now, and didn’t start playing publicly until he was 50, which is about as old as he looks today. “Everyone always judges my age wrong,” he laughs. “I love that.”

Boone started playing the Hideaway Saloon six years ago, and he can be seen there every Monday night with his band, the Back Porch Pickers. His new album, Getting Back to the Old Time Ways, includes a theme song, “Hideaway Song.”

“I’m not good with fiction,” he’s learned. “If I write about what I know, what I’ve lived, most of the time it flows pretty good.”

His songs are mostly drawn from his life, though not entirely. “You got to make it a story,” he says. Boone discusses one song, “Ain’t Gonna Let It Bug Me,” inspired by a man he encountered who had a visible anger management problem. “I always tell everybody, the 11th Commandment is ‘Thou shalt not go through life pissed off.’” He didn’t think the guy deserved a song, but it inspired him.

Boone decided to pursue songwriting after listening to his favorites — Woody Guthrie, Bob Dylan and Jackson Browne — for years. A Sam Bush concert inspired him to push past the stage fright he had been experiencing. “He had family there and a lot of friends, and everybody — the audience — was having a good time. That was my turning point. ‘If you’re gonna do this, have fun and forget about it.’”

Boone celebrates with a record release show at the Hideaway on Saturday. He’s been writing new songs for the next album. “This one took about three years, pecking at it a little here, a little there,” in between performing, working during the days and taking care of his mother, who is suffering from Alzheimer’s. “I’m hoping this time it won’t be another three years in the making.”

Look up “Tom Boone and the Back Porch Pickers” on Facebook to learn more.