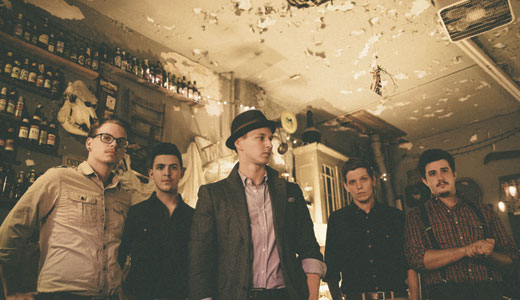 An older, wiser, yet still harmonious A Lion Named Roar have released a new EP, Foreign Land, which they recorded over the past year. The pop-rock quintet celebrate with a show at Headliners on Dec. 7. LEO spoke with singer Chris Jackson and guitarist/singer Tyler Anderson.

Chris Jackson: Our last album came out in, I think, ’09? It was Americana folk-rock. We went in a different direction, trying to figure out what kind of music we really wanted to play … get back to the heart of why we play music.

Tyler Anderson: The cool thing about this EP is that we came together with very specific ideas in mind. We threw everything we could potentially be bad at out the window (laughs).

LEO: Your album Said & Done had a song called “Jazz Kazoo.” Why aren’t there more song titles like that on your new EP?

CJ: (laughs) That song was such a novelty, in our eyes, because we joked about it so much. Come to find out, a lot of people really enjoyed it. People would ask for that song more than any of them.

LEO: Your booking agent is named Keith Richards. How could someone with a name like that ever hope to make it in the music business?

LEO: You were called “MTV Buzzworthy.” What does that mean?

CJ: We’re joking, but when we heard about “Buzzworthy,” we were like, “That is awesome. That’s really cool that they found it in their hearts to put us up on their ‘Buzzworthy.’” My internal 16-year-old who used to stay up till 2, 3 in the morning to watch music videos … it was an amazing accomplishment, for sure.