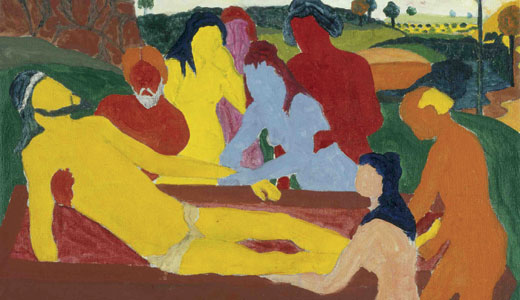 Written history is full of gaps, and art history is no exception. This leads artists, curators and historians to become detectives, digging through archives, talking to family and friends, and uncovering long-hidden artwork.

Such is the case of Bob Thompson, an African-American expressionist who spent some time at the University of Louisville. Part of the Hite Art Institute’s 75th Anniversary Celebration, “Seeking Bob Thompson: Dialogue/Object” has become a way for Louisville to rediscover an important artist.

The exhibition is a labor of love for curators John Begley and Slade Stumbo. Begley, Hite Art Institute Gallery director, enlisted Stumbo’s help as a graduate fine art student. “I was aware (of Thompson) before my move to Louisville,” says Begley, “but when I realized his connection to Louisville, I became very excited.”

Although Thompson’s art was hiding in plain sight — his work is in prominent museums like the Hirshhorn Museum and Sculpture Garden, Metropolitan Museum of Art and the National Gallery of Art — not a lot is known about the man. “He’s a complex man, human and artist,” Begley says. “Seeking to find someone long dead is a daunting task. When that someone spent his working life attempting to escape capture, to be free, the task is even more difficult.”

Thompson received a Hite Art Scholarship in 1957. The next year he spent his summer semester studying in Provincetown, Mass. By 1959, he had left U of L in order to move to New York City.

In his lifetime (he died in 1966 after surgery and from a drug-weakened body), he created more than a thousand works. The show features 30 of his paintings and drawings, including art that hasn’t been on public display. While U of L owns several early pieces, the Speed has one watercolor, and a few are in private Louisville collections, Begley and Stumbo spent a lot of time traveling to find the works.

Thompson’s artistic influences were many. “He loved the … European Old Masters, from the Renaissance and Baroque,” Stumbo says. Such inspiration is seen in his colorful, multi-layered composition “Untitled” that was based on Piero della Francesca’s “The Proofing of the Cross.” Thompson’s “The Entombment” has elements from the 15th century (after Dieric The Elder Bouts) and the 19th (Gauguin).

His other work is extremely personal with an iconography that is difficult to decipher. His father died when Thompson was 13 years old, and it’s believed figures wearing hats may be “the absence of an adult, maybe the father. He was drawing from his deep self, his dream state,” Stumbo explains.

Thompson was also a black man living in a segregated society prior to the Civil Rights movement. He did spend “a long time in Europe,” adds Begley. “He was moving between boundaries, seeking his freedom.”