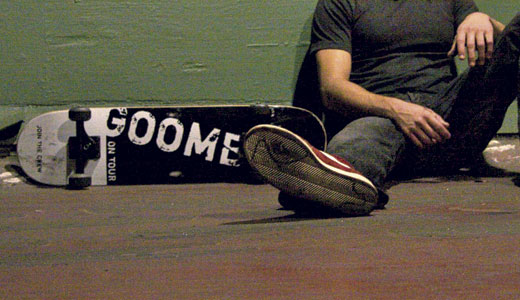 If you went to high school with Joda Pyle, you are going to start running into to him again around town. He’s back from a decade on the West Coast, on a mission to promote skateboard culture in the River City. Founder of GOOMBY skateboard company, the 29-year-old entrepreneur is on an ambitious trajectory of business expansion, which starts with GOOMBY Gallery — a commercial art gallery specializing in street art and culture, opening Saturday — and ultimately a skateboard production and distribution facility in Jeffersonville.

GOOMBY, which is an acronym for “Get out of my back yard,” started eight years ago in Los Angeles. “I just love skateboarding,” Pyle says. “I’m not the best skateboarder by any means, but I just love the culture.” His GOOMBY company produces skateboard decks; however, with the addition of the gallery, Pyle plans to extend his brand, selling “hipster apparel,” “street art” and “avant-garde accessories” under the GOOMBY name. He feels the market has been underserved in Louisville, and that the city’s already existing infrastructure presents him with a unique opportunity for expansion.

“2009 rolled around, and I realized that I’m just another skateboard company. What is differentiating me from the other skateboard brands out there?” he says. “So I kind of went back to my roots — I really did study the market of Louisville … (skate) decks are wood, (like) Louisville Sluggers, (the area is) centralized for UPS logistics … so we have factory, distribution, retail. It just works. Louisville hosts the largest skate park in the country.”

In addition to working as an entrepreneur, Pyle has also worked as an actor and is in the process of producing a street culture mockumentary show starring himself — and highlighting street style depicting Louisville as a skateboarding mecca. He describes the idea for the show as “‘Entourage’ meets the streets.”

“A lot of people see skateboarder kids as punk, out of work, slacking in school, just kind of a slum, really, but that’s not our culture, that’s not the culture I represent … There’s a lot we want to show out in the forefront that we’ve been keeping underground for some time, and we want to bring it out in our own way.” If Pyle’s plans succeed, the reputation of skateboarders as disengaged slackers may suffer a permanent blow.

Pyle plans to rotate featured artists and craftspeople pulled from Louisville’s crafters and artisans for his jewelry and apparel. December’s artist is Braylyn Resko Stewart, who is known for graphic tattoo art and murals.

GOOMBY gallery is located at 414 Baxter Ave. (in the Radford Building at the intersection of Baxter Avenue and Lexington Road next to Baxter Jacks). At the opening, Pyle will be collecting donations for BeGracious.org to assist with recovery efforts for the victims of Hurricane Sandy.