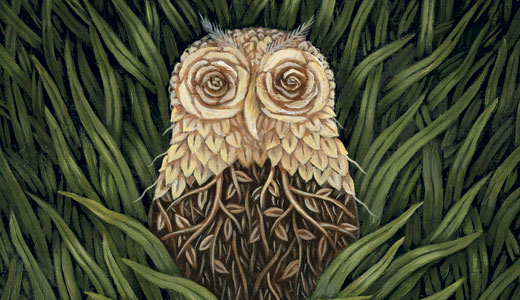 If you are in the habit of skipping art openings in order to avoid the social hullabaloo that usually goes along with them, then sadly, you missed the opening of Kathleen Lolley’s “New Work” exhibition at the Green Building Gallery for no good reason. Last Thursday’s opening was perfect for this thoughtful show of shy, painstakingly detailed paintings, with a couple dozen people drinking out of plastic cups and talking like companionable neighbors. Something else was happening there that I hadn’t seen at an opening in a long time, too — people more interested in the paintings than each other.

There’s a good reason for that — if you are a fan of Lolley’s work, with its anthropomorphic animals, storybook style visual narratives, and edgy folk art imagery, then you will appreciate this new body of work in which she continues to develop many of her signature themes and motifs. The Louisville native, who now spends her days in Pittsburgh, says these new paintings were inspired by her growing awareness of transitions in the natural world that she has developed through direct observation from her rural home, and from going between the poles of spending time caring for her ailing father and two rambunctious young nieces.

This exhibition is full of the symbolism associated with transition — cocoons, falling leaves, tender grass shoots, moths emerging from decaying bodies like flocks of startled birds. All of her fantastical creatures are hybridized, some wearing capes made from birds over their skull faces, and several serve as the reoccurring protagonists, conducting ceremonies, rituals and magic. In “The Magician,” her creature conjures the entire life spectrum of the moth over a bubbling caldron on a tree stump. In “Welcome to Darkness,” one comforts another under a golden-leafed tree, and in “Waiting for Resurrection,” two bird creatures carefully attend a pupa in a crystal casket. Yet, there is something yielding in her depiction of transition — no trace of struggle is evident.

The influence of Tarot typologies is also prevalent in the exhibit, as “The World” and “Ace of Swords” take their titles directly from the traditional archetypes. As a development from her previous works, Green Building Gallery curator Daniel Pfalzgraf notes a technical shift in this show. “In these, Lolley works with a greater depth of field. Most of the larger paintings have a fully textured, back, fore and middle ground.”

Her palette has taken a turn for watery blue, and when she mentioned the influence of Hieronymous Bosch’s “The Garden of Earthly Delights” altarpiece, it was easy to see the connection between that famous study of mortality and immortality in both content and color in these pieces about the transcendent aspects of the physical life cycle.

In an age of large format everything and endless reproductions, Lolley’s unique paintings evoke a reverence for detail and the work of a creative mind and careful hand — which is possibly what accounted for people acting like they were in a library at the opening. Kathleen Lolley’s “New Work” is recommended for your imagination and attention.