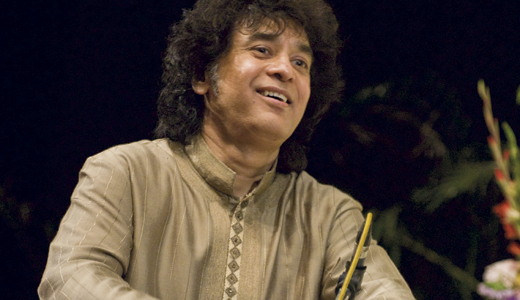 Probably the best-known living tabla player, Zakir Hussain is the son of legendary tabla master Alla Rakha. Hussain has previously performed in Louisville in a concert of classical Indian music with santoor player Shivkumar Sharma, and in a more contemporary setting with Béla Fleck and Edgar Meyer.

This time Hussain performs with Rakesh Chaurasia, who plays the bamboo flute known as the bansuri and is the nephew of legendary bansuri artist Hariprasad Chaurasia. When LEO interviewed him by phone recently, Hussain began with a discussion of the bansuri.

“There are no keys on the instrument,” he explains. “The tuner who makes the flute understands exactly where the holes should be to get the notes for the 12-note system we follow all over the world. A very intricate technique was developed in India to make the notes appear to be going a quarter step up or down.”

LEO: There are so many different aspects of the work you do and the musicians you play with. It must keep life interesting for you to adapt to the different roles you play.

Zakir Hussain: Yes, it’s a challenge and also is what keeps life interesting for me. This is why playing music is not boring or monotonous, because it’s the kind of interactions I’m lucky enough to be a part of, whether it’s Mickey Hart or Béla or Shivkumar or Ravi Shankar or John McLaughlin or Charles Lloyd … Each brings a different challenge and a different opportunity for me to expand my own learning curve.

When I play with Rakesh, of course, I go back to my interaction with his uncle, Hariprasad, the greatest Indian flautist that ever was — and Rakesh is now considered to be his heir apparent and one of the finest instrumentalists in India. Both Shivkumar Sharma and Hariprasad Chaurasia, and Ravi Shankar, too, have asked me to showcase the younger instrumentalists in India so the next generation of Indian musicians will have an audience.

So, the music we are going to play will, of course, draw on my interaction with Hariprasad, but the difference is that Rakesh has been influenced by a variety of music in India — folk, contemporary, Bollywood — and has grown up listening to other music. He is also the most sought-after flautist in the session world of Bollywood.

So, apart from featuring the raga presentation in the traditional mode, we will also have some interesting elements of where the flute and tabla are now in contemporary Indian music.

LEO: What does it mean for you and Rakesh to be the younger family members of such prominent musicians?

ZH: When we get on stage, the first part of the concert is much more an offering and prayer, with a focused and meditative quality in the performance. It is important that we first offer our respects, our prayers and worship to the ones who have gone before and the ones who have given this to us.

Once we do all that, the second part of the concert becomes more of a fun, playful interaction, drawing on folk and popular music. So for us, the approach is a little bit more respectful and, in some ways, kind of nervous. Being so intimate with where the music has come from, we feel more responsible and careful in our handling of how it is shared.

I’ve always stressed the fact that we tend to focus on the musicians with the marquee names. But it’s important to understand that even though my father was the most well-known tabla player in the world, there were others just as good. I hope that the audience will come with an open mind and an open ear, and will experience and walk this journey of music with us.

ZH: He’s putting in his two bits worth. Playing in small towns in India, they would erect a stage in a field, and the audience would sit on the ground. It was normal for a dog to walk through the audience or even appear behind the artist on stage, and generally (be) considered part of the performance and one of the audience — so, for me to hear a dog speak while we are speaking is normal.