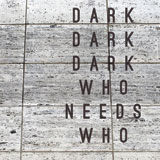 Who Needs Who is not just the latest Dark Dark Dark album, it’s also the latest great album that should be taught in schools and known by all citizens. The gypsy folkers, now sprawled from Minneapolis to New Orleans, suffered from some Fleetwood Mac-style drama; after making loving fun, they wisely stayed together instead of going their own ways and, as with Mac’s Rumours, have produced a stunning collection of songs. A description of their various parts — goth, indie, folk, with dashes of European horns and accordions, propelled by the unsurpassable vocals of pianist Nona Marie Invie — might not sound like an obvious crowd-pleaser, but fans of Feist, Bat for Lashes, or even Adele should be won over. And those Adele people need a second record to buy this year, right? It is October already.