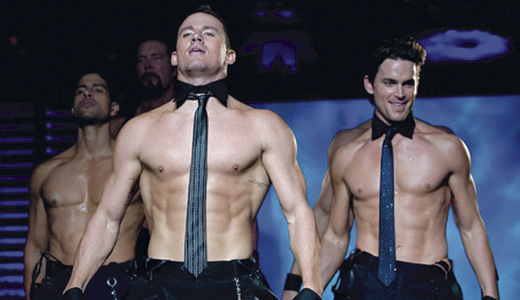 Once you’ve laughed at the title, the filmmakers had to come up with a movie worthy of that title, and that’s where things broke down. What clearly should have been a silly, tongue-in-cheek yank on modern film tastes became a much-too-serious movie with an actual plot. Unknown Benjamin Walker plays Honest Abe, out to kill Confederate bloodsuckers with his trick silver axe/gun. Kinda fun, but this could have been so much better.

We’re not sure who the audience was supposed to be for this undisguised meat market of a film, but we’re pretty sure they don’t like girls. Channing Tatum heads up an all-male review of hardbodies including Alex “I Am No. 4” Pettyfer, Matthew “Abdomen” McConaughey, Matt “White Collar” Bomer, and Joe “True Blood” Manganiello. If there was a plot afoot, we missed it, but the women and gay men in the audience didn’t seem to care. Directed by Steven “Contagion” Soderbergh; with Cody Horn and Olivia Munn for the rest of us.

This low-rent sci-fi thriller is fun and ambitious, combining government-implanted brain chips, out-of-control military nuts and merciless, rampaging space aliens to tell a tale of insanity, infidelity and remote-control murder. But what’s the goal of all this manipulation? Fear! The aliens are feeding on our fear!

The first no-budget indie “Cabin in the Woods” rip-off! A quiet nerd-guy named Nancy gets a dose of LSD from his camping buds. He, of course, goes postal and starts killing; the survivors run, boarding themselves in an old cabin. But it’s all just an experiment by a sinister corporation lead by Armin Shimerman (Principal Snyder from “Buffy”), backed by the government with the full cooperation of President Edwin Neal (the hitchhiker from the original “Texas Chainsaw Massacre” and a long-running fixture on “The Power Rangers”). Enjoy.

HALF THE SKY: TURNING OPPRESSION INTO OPPORTUNITY FOR WOMEN WORLDWIDE

A cadre of Hollywood hotties led by Olivia Wilde and Diane Lane introduce the viewer to the savage plight of women around the globe. Amid lives of constant horror, rape, mutilation, subjugation, death, starvation and disease, they are learning how to rise above, creating new opportunities for themselves and their children — and you can help! The key is international micro-business, providing the continued wherewithal to move forward. Possibly the most important video you will ever buy.

If you haven’t caught this ABC series, listen up. A truly bodacious set of friends, including Elisha Cuthbert (“24”), Eliza Coupe (“Scrubs”), Damon Wayans Jr., and Casey Wilson (“SNL”), learn to deal with all the insanity of hip young-adult life in downtown Chicago. Like what? Like sex. Lots of sex. And landlords. And old friends, bullies at the gym, unwelcome birthday parties, breakups, makeups, re-breakups and all the other things that make life so painfully wonderful. Our vote for today’s funniest American broadcast TV series. Check it out.

As longtime readers know (support groups available), we’ve refused to review any more Tyler Perry flicks until he stops putting his name in the title. Well, he’s at least minimized it on this one, a more mainstream effort than his usual fare with co-stars Eugene Levy, Denise Richards, Doris Roberts and Tom Arnold playing off Aunt Madea in a silly “white guys hidin’ from da’ mob” comedy. And we mean “silly” in the best sense: It’s fun, funny and lightweight, and seems comfortable being so. Won’t change your life, but will make you laugh.

SEEKING A FRIEND FOR THE END OF THE WORLD

Steve Carell brushes off his sad-sack persona in this apocalyptic romancer. The world is doomed and there’s nothing anyone can do about it except to live out their remaining days however they wish. His wife wishes for someone else. Then comely neighbor Keira Knightley launches the two of them on a quest to find his former high-school girlfriend, only to discover … Hey, do we have to do everything for you people?! Comic, heartfelt and true, with the Cast of the Gods.

This may be the truest, most affecting romantic drama we’ve ever seen. Loving wife Michelle Williams (“My Week with Marilyn”) dotes on hubby Seth Rogan, yet is unable to quell her growing attraction to hunky artist/neighbor/friend Luke Kirby. In a moment of weakness, one poor choice leads to bouncy-bouncy satisfaction, changing all their lives. Leisurely paced, graphically European at times, this is a film for thinking adults. Recommended.

A spicy doc on the selling of diplomatic titles, a piece of paper that makes the holder immune from any criminal prosecution, allowing them to become obscenely wealthy, especially in the world’s most war-torn areas. Surprisingly comic in tone, it takes us to the terrifying Central African Republic to see just how easy it is to be a god, if you simply have no morals whatsoever. Truly inspired filmmaking.

A veritable who’s-who of schlock moviemasters — Lloyd Kaufman, Robert Kurtzman, Herschell Gordon Lewis, Frank Henenlotter, et.al. — expound on the art, business and fun of making crappy, no-budget horror films. Focusing on the “three Gs” (gotchas, gore and gratuitous nudity), this is the perfect primer for anyone who has ever dreamed of making their own fright flick. The line forms right here, fellas …

No one expected this, the fifth in the low-budget “inbred hillbilly cannibals attack” series, to be anything but more of the same. And it pretty much is. They’ve wisely kept the infamous Three Brothers, set the plot amid Halloween, and brought in Doug “Pinhead” Bradley to add some gravitas. But the best two things they did were hire nubile Roxanne McKee (“Game of Thrones”) as a victim and blonde babe Camilla Arfwedson as … the sheriff!

We’ve always said that the opposite of a good idea is ALSO a good idea. For example, compare “The Beverly Hillbillies” and “Green Acres.” This low-budget import is the opposite of “Frozen” (with friends trapped on a freezing ski-lift at night), about a small group of friends trapped in a runaway sauna with no hope of escape or rescue, and the temperature is approaching the death-dealing titular mark. A good, solid thriller; well acted, with an attractive cast — what more could you want?

This is a fun little doc about a topic that’s dear to our hearts: the pursuit of insignificant world records. Or to be more precise, it’s about the people who pursue them and why. What possesses a grown man to spend his life spinning a 12-foot hula hoop? Where’s the reward in long-term mouth-grape juggling? Only the competitors know — and sometimes even they are clueless. Surprising, uplifting and entertaining.

LIFETIME PRESENTS: THE 12 DAYS OF CHRISTMAS

This no-budget spoof of “Paranormal Activity” movies and spooky TV shows is surprisingly good, and surprisingly kid-friendly (if your kids are as messed up as ours). A bored married couple dabble in the occult to help spice up their lives. But when things get out of hand, word gets out, attracting the attention of the worst bunch of video ghost-hunters imaginable. Stars no one in particular, though nasty little horro-vet Cyn Dulay is a knockout as “Utopia.”