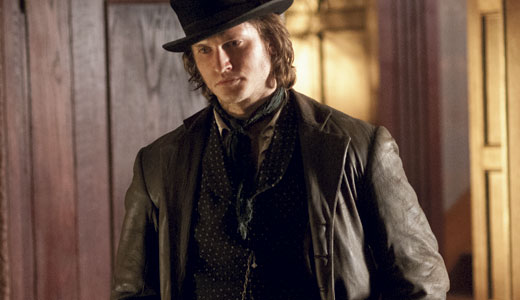 We have become hopelessly hooked on this 10-part miniseries from the BBC set in NYC near the end of the American Civil War. There, in the “Five Corners” region, immigrants from around the world huddle together to eke out an existence as Americans amid filth, disease, intolerance, brutality and crime. Meanwhile, just blocks away, the super-rich live lives of decadence and privilege. No one is innocent here, including the 11-year-old prostitute and her protector — and would-be lover, if she had her way! — policeman Kevin “Corky” Corcoran. Trust us, this is terrific (and it reminds us more than a little of Louisville from the same period).

The latest amazing offering from the Duplass Brothers (“The Do-Deca-Pentathlon”), inspired by a true story. A trio of magazine writers led by Aubrey Plaza (“Scott Pilgrim vs. The World”) answer a wanted-ad looking for a time-travel companion, only to discover that the author is a dysfunctional grocery clerk. The result is an incredibly sweet, completely unexpected journey into the human heart. Smart, funny and unique; an exceptional movie you’ll be talking about for days.

This new sequel to the perennial TV Christmas favorite finds Ralphie (now played by Braeden Lemasters of “Easy A”) a bit older and dreaming of a car. Daniel Stern takes the reigns from Dad Darrin McGavin, with Stacey Travis (also from “Easy A”) as the mom. Is it any good? Well, it’s still based on the works of author Jean Shepherd, the cast is top-notch, and its heart is in the right place. Whether it can catch lightning in a bottle like the first one remains to be seen. Frankly, the bar for Christmas TV fare isn’t set that high, so we think it’ll catch on.

A commitment-phobic man living in Paris returns to the United States when his mother dies. While putting her affairs in order, he finds that she had a long-term lesbian relationship with a beautiful, if somewhat skuzzy, woman (Salma Hayek), who works at a seedy Tijuana strip club. If you learn nothing else from this flick: Stay out of Tijuana.

The original “Coma,” starring Geneviève Bujold, Michael Douglas and Rip Torn, is one of our favorite movies, but there’s a lot to like in this Lauren Ambrose-helmed cable-TV miniseries. The longer format allowed A&E to more fully explore Robin Cook’s book, and with Ridley Scott at the helm, you can be sure of surprises. An attractive med student (Lauren Ambrose) becomes suspicious when minor medical procedures are leaving patients brain-dead — and they are too quickly sent to a mysterious high-tech care facility. Still nicely shocking; recommended.

A spicy, dark, gay romantic comedy/drama from Brazil. Lesbian would-be photographer Elvis delivers pizzas at night on her motorcycle. Transvestite hairdresser Lady Madonna orders a pie, but before it can be delivered, is beaten up and robbed by her lover. That’s how Elvis finds her, and the two become friends, then lovers. But Madonna’s former boyfriend still has an axe to grind.

Max Fleiscer was one of the first true master animators, yet most of his best work has languished unrestored since the 1930s — but no longer! This set is a museum-quality collection of his genre-defining Superman shorts in all their art deco splendor, evoking avant garde imagery from silent movie utopias, German expressionist masters and social experiments of the early 1900s. This swirling visual palette paints Superman as the pinnacle of man’s would-be evolution. A must-own for any animation fan.

The image of Yukari Oshima high-kicking her way across the screen is forever burned into our brains from the first time we saw this excellent little martial-arter back in the late ’80s. She’s a police officer on the trail of two comical car thieves (think Charlie Sheen and D.B. Sweeney from “No Man’s Land”) who think they can get away. Lots of terrific fight scenes involving knives, brooms and tools; ya gotta love this thing.

The Child Protection Unit of the Paris police department — which really exists — deals with society’s most degraded villains: pedophiles, child sex slavers, kidnappers and more. How can anyone hope to lead a normal life when they are exposed to such horror on a daily basis? That’s the premise of this drama, which considers the toll on the lives of cops on the world’s most inhuman beat. Excellent.

Mia Farrow and John Cassavetes learn the true meaning of hell when they have kids. Been there. You need more? Really?! OK, OK. New-wife Mia seems to lose her husband to craggy Ruth Gordon and her cadre of smelly oldsters just before becoming pregnant. His star rises while his competition seems to have a lot of bad luck, and her life becomes a mounting nightmare of terror and loathing. But it’s all just mommy-to-be paranoia, right? Roman Polanski directs the classiest shocker that matinee-mogul Bill Castle ever produced, and the shocking finale still satisfies. Our highest recommendation.

While we’re not big fans of Will Ferrell, he and Zach Galifianakis have an absolute ball in this surprisingly good political comedy directed by Jay “Austin Powers” Roach. Ferrell is a slick, self-obsessed congressman who has crapped on too many of his constituents (you listenin’, Mitch?). So the richer ones find a dimwitted chump (Galifianakis, channeling Rand Paul) to be their puppet-candidate. But it’s all just an excuse to let the two leads see just how outrageous they can be. We hate to admit how much we like this.

Here’s a fun, colorful stocking-stuffer for the wee-uns: The “traintastic” town of Chuggington suffers a winter storm, burying the rails in slippery snow and ice! But our three curious train-ees won’t let that stop them from learning about teamwork and the value of thinking through their problems instead of barreling full-steam ahead.

This spry romantic fantasy has garnered an enthusiastic fanbase almost overnight. A lonely young writer (Paul Dano from “Looper”) invents a character named Ruby who seems more than real to him. So imagine his surprise when he finds the real flesh-and-blood Ruby (Zoe Dano, TV’s “Bored To Death”) sitting on his couch one day! As original and lively a film as we’ve ever seen.

An earthy morality tale about a pair of bohemian young Americans, bumming around Buenos Aires, who meet a beautiful American girl who just happens to have a stash of illicit loot back at her crazy boyfriend’s apartment. You know this is not going to go well, right?