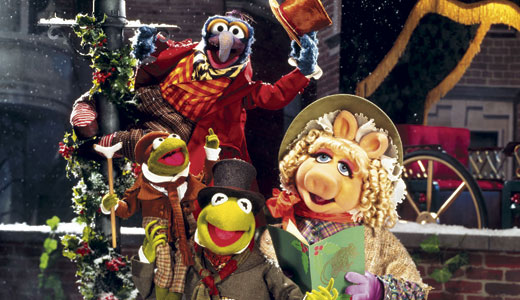 OK, we’ll admit it: We’re big fans of Spongebob, but what’s really cool about this Christmas special is that the whole thing is done in stop-motion animation! That makes us very happy, unlike Plankton (who always gets coal in his stocking), who will be predictably glum sitting alone in The Chum Bucket — unless his latest scheme to wrangle the secret formula for Krabby Patties proves successful! It’s just the usual mind-warping, bottom-of-the-sea silliness that you’ve come to love, but with a much cooler look. Or, as Patrick says, “It’s gonna rock!”

At last count, we have 25 versions of Charles Dickens’ tale of Ebenezer Scrooge clogging our video wall. But this one is our favorite: An early work by Brian Henson not long after his father, Jim, had passed away, starring Michael Caine as that covetous old miser, and Kermit The Frog as Bob Cratchit — with Miss Piggy as his wife! The Great Gonzo keeps it lively and spry as our narrator — Mr. Dickens, himself! — with help from Rizzo the Rat. Great music by Paul Williams and some of the best sets the Muppet Workshop has ever produced make this a must-own, now in a 20th Anniversary Blu-ray edition. Enjoy.

This little-known tale of the Oshi Clan, accused of murder by a cowardly Shogun’s son, is as solid and satisfying as any Samurai flick you’ll ever see. But it became something of a cause celebre recently when some unknown smart-ass filled its IMDB page with misinformation. Specifically, they charge that it is a “version of” 1978’s infamous “Message From Space,” a “Star Wars”-ish ripoff of Akira Kurosawa’s masterpiece, “Seven Samurai.” Worth a look, whatever its providence.

Set amid the 2000 “Water Wars” in Bolivia — when multi-national corporations began taking possession of the nation’s water supply — a pair of filmmakers attempt to make a film about the decimation of South America at the hands of Christopher Columbus. High concept? Kinda, but the point is to show how indigenous people (uh, like all of us) are now and have always been fodder for unchecked corporate greed. Stars Gael Garcia Bernal from “The Motorcycle Diaries.”

This goofy, loving ode to all things Southern, American and Dolly Parton is gangs of fun. It’s a doc about two gay brothers who write a screenplay just for Dolly, then set off on a cross-country RV trek to deliver it to her, meeting all manner of men and women, bigotry and tolerance, tornadoes and floods along the way; all to a classic Dolly soundtrack. We guarantee you will like this.

The first-ever pairing of grunt-meisters Steven Seagal and Steve Austin finds them decommissioning an old prison — and responsible for a pair of comely and mysterious female prisoners. Why? Well, wouldn’t be much of story without them now, would it? And, of course, there’s a platoon of elite mercenaries heading their way, gunning for the pair. Aaannd ACTION!

Writer/director Akira Kurosawa’s legendary tale of a horrific crime, told from four viewpoints, is still being studied, analyzed — and copied — over a half-century later. Toshirô Mifune delivers the performance of a lifetime as the bandit whose base urges and rash acts of brutality sets the tale in motion, but the real star is truth — which is always on display but never really exists in our world. One of the greatest films ever made, now available in a Criterion Blu-ray release. A must-own.

The first two “REC” films (remade by American filmmakers as the “Quarantine” franchise) helped launch the international “found footage” genre, with tales of people being consumed and infected, trapped by a dark nameless “something” in an old apartment building, leaving only their vidcams to tell the tale. And both are damn good. This third entry moves beyond dark interiors to corrupt a couple’s wedding, juxtaposing the brilliant daylight and bridal white with zombie gore. Nicely over-the-top in spots; worth a look.

It’s surprising how many people today have never seen this, the definitive classic Hollywood movie. Film legend Gloria Swanson gives her greatest performance as former silent film star Norma Desmond for writer/director Billy Wilder. She hires washed-up screenwriter William Holden to draft her a smash comeback flick, but it’s obvious from the first frame that this all going to end in disaster — you can see it in the eyes of Erich von Stroheim, Desmond’s butler, former husband and director. A PhD course in how to create the perfect film, now available on Blu-ray.

Created more as a means to hang on to an expiring copyright than to satisfy the public’s hunger for Spidey, this was unnecessary, if very entertaining. Andrew Garfield is a geekier Peter Parker than previous incarnations, with Emma Stone as his would-be girlfriend Gwen, and a surprisingly good Denis Leary as her cop father. His greatest nemesis, The Lizard, finally arrives, though Rhys Ifans would not have been our first choice. Yes, this is a far more comic-booky tale than those told by Sam Raimi, but we’re not complaining. We’ll keep watching “Spider-Man” as long as someone wants to make them. The sequel is due in 2014.

To our knowledge this BBC detective series has never been widely seen in the United States, and that’s a crime that needs investigating. Veteran thesp Brenda Blethyn plays Vera Stanhope, an obsessive 60-something chief inspector with more than her share of inner demons. Her only real friend is a put-upon underling, Sgt. Joe Ashworth (David Leon), whom Vera treats like a son in need of direction. Her acid tongue and talent for analysis reminds us more than a bit of Hugh Laurie’s Dr. Gregory House. May be hard to find, but definitely worth the effort.

Here’s an easy, welcome and very unexpected Christmas gift for the ’rents. Back in the early ’60s, Danny Kaye (“White Christmas”), one of America’s most beloved performers, had a top-rated weekly variety show on CBS. And each year, he would pull out all the stops for a big, blockbuster Christmas show with guests like Nat King Cole and Peggy Lee. This way-too-cheap vid contains two of the best shows. Recommended.

Werner Herzog narrates this surprising look at the daily life of dinosaurs. And if you think you’ve seen enough damn dino-docs to last a lifetime, you’re in for a shock! Cutting-edge science and masterful CGI animation combine to dispel many common misconceptions about dino-life and will introduce you to a dozen creatures that were completely unknown to science just a few short years ago. Excellent.

I AM: SMTOWN LIVE AT MADISON SQUARE GARDEN

As far as we know, this is the first “K-Pop” concert video ever made and sold in the U.S. K-Pop, that South Korean musical blend of dance, electronic, electropop, hip-hop, rock, and R&B, is apparently taking our country by storm, and this nearly three-hour concert features some of its leading lights: KANGTA, BoA, TVXQ!, Super Junior, Girls Generation, SHINee and f(x). It’s not “music” in any sense we understand, but to each his own.

A truly wonderful Swedish romantic drama that just happens to be about a pair of attractive lesbians. They meet at the engagement party of their respective parents, one of them with her male fiancee in tow, but once they meet, sparks fly and the chemistry becomes almost palpable. Wonderfully mature, uninhibited and sexy.

While we generally don’t care for “war pictures,” you gotta love this seven-time Oscar-winning look at Gen. George Patton, the only man the Nazis actually feared. George C. Scott perfectly captures both Patton’s brilliance and his “personality issues” (to put it bluntly, the man was a major asshole), revealing that those two traits combined to quite literally save the world. Afterward, of course, the world had no further use for him. Now available on Blu-ray.

A nice original sequel to Disney’s 2009 CGI made-for-cable outing about a pair of Santa’s elves (Dave Foley and Derek Richardson) who must stop a kid who has hacked into Santa’s computer and diddled with the Naughty/Nice list. Clever family entertainment with something for everyone, including a sly cameo from “A Christmas Story” featuring Ralphie and that weird kid with the goggles. Co-stars the voices of Sarah Chalke, Chris Parnell and Rob Riggle.

This IMAX 3-D Blu-ray look at what really happens when disaster strikes anywhere on the globe is fully immersive, regardless of what kind of hardware you play it on. Follow First Responders as they go through some of the most arduous training imaginable, then rush to Haiti when an earthquake flattens that island nation, bringing hardware, people, food, medicine and water with the not-so-simple goal of saving lives.

Frankly, this spoof of found-footage movies isn’t great: It’s badly written, poorly directed and stars no one you’ll recognize — which is exactly the point! Nearly ALL found-footage movies are terrible, leaning on that shaky vidcam crutch to make the action (or lack thereof) seem more real! So … compared to most of the movies it spoofs, this thing rawks!

A collector’s edition set of Joe Berlinger and Bruce Sinofsky’s documentary trilogy on the West Memphis Three, convicted of the ritual murder of three 8-year-olds, a crime for which they have always maintained their innocence. The first introduces the case, suggesting that the accused’s only crime was being fans of Metallica. The second identifies a far more likely suspect, but the police won’t re-open the case. The third looks at the case anew, considering the evidence (or lack thereof) with fresh eyes, and documenting the worldwide movement to free the men.

This Blu-ray/DVD four-pack of railroad-based learning for the wee-ones would make a terrific Christmas gift for some lucky tyke (and their parents). Topics include the importance of getting along with your friends, respect, welcoming new kids into your life, birthdays, ghosts and more. Almost four hours of coal-burning goodness.

Mark Duplass is terrific in this knowing, if silly, indie look at love in the 21st century. He plays a lazy man, still recovering from his brother’s death, who accepts an offer from his late brother’s girlfriend (Emily Blunt) to spend some time at her family cabin. He buddies up with the girlfriend’s lesbian sister (Rosemarie DeWitt), ending in a night of tequila-fueled and damn funny sexual experimentation. The family breakfast the next morning is too entertaining for words. With Mike Birbiglia; recommended.