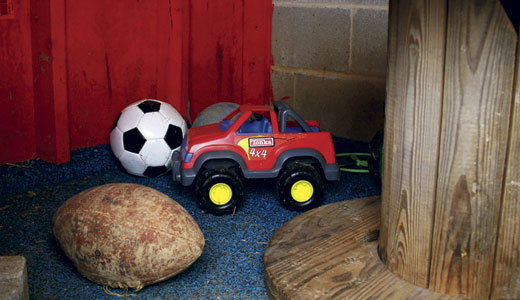 Scene from a vacant, recently foreclosed home.Photo by Phoenix Lindsey-Hall

It’s estimated Louisville has up to 7,000 vacant properties, 1,300 of which are abandoned. Most of these homes, buildings and lots sit in western and southwestern Jefferson County, much to the frustration of neighbors.

Several days ago, Mayor Greg Fischer and Councilman Rick Blackwell (D-12) rounded up the press to announce a proposed new ordinance they hope will combat the problem.

The law would require financial institutions to alert Metro when they file a foreclose action in court by registering with the Department of Codes and Regulations. Furthermore, these creditors must determine whether the property is vacant and provide a local contact person responsible for maintaining the home, ensuring lawns remain cut, debris cleared.

It’s not uncommon for the foreclosure process to drag on for six months to two years. During that limbo period, homeowners may flee the property, leaving Metro as default caretaker.

“This new registry will help us create a database of all properties in foreclosure while also holding banks and financial companies responsible for maintenance,” Fischer said in a statement.

An added perk? The city can collect some money from financial institutions through fees and penalty charges for those who abdicate duties.

In the last 10 years, the city has spent $12 million caring for vacant properties. Meanwhile, the Department of Codes and Regulations battles to keep up with blighted homes and buildings. In September, the agency worked on a backlog of 2,000 properties demanding attention.

While many housing advocates and the Mayor’s Office applaud this latest effort, resistance has surfaced. Not surprisingly, bankers question the legality and logistics of the ordinance. And while Metro Council won’t officially review the proposed legislation until this week, some council members, who sit on the very committee charged with addressing the issue of vacant and abandoned properties, have already raised doubts.

On a Monday evening meeting of Metro’s Ad Hoc Committee on Vacant Properties, Mary McGuire, who leads the city’s vacant and abandoned properties initiative, laid out arguments in favor of the ordinance. Clicking through a PowerPoint presentation, she cited a 2011 report from the Government Accountability Office. It showed that 10 to 20 percent of properties are vacant at the time of a foreclosure filing. At the time of a foreclosure sale, that number rises to 40 to 50 percent.

McGuire highlighted that more than 800 cities, including nine Kentucky communities, currently have a proposed or active ordinance similar to the one Mayor Fischer endorses.

But Councilman Kelly Downard (R-16) immediately pointed to the “serious flaws” he sees in the proposed law. (Downard also expressed annoyance over the fact that members of his committee learned of this legislation in the newspaper and that it was not discussed by members beforehand.)

Downard, who spent years in the banking industry, doesn’t believe creditors can legally inspect a home to determine vacancy, saying he has “serious doubts” as to whether they can enter a house to inspect it upon filing a foreclosure since they don’t yet hold title to the property.

It’s a concern echoed by the Kentucky Bankers Association.

“I think it puts liability on the bank to assume a property is vacant. And, of course, if it’s not vacant, no one has the right, other than the city and the health department, to go in and make demands on mowing the grass,” says Debra Stamper, KBA’s executive vice president. “So that’s an example of something in the ordinance that needs tightening up.”

“Every mortgage document gives (creditors) the right to protect the secured interest — the home — from damage,” Carter says.

During the committee meeting, McGuire also cited mortgage contracts as proof creditors can take necessary steps to secure and maintain a vacant home.

But Metro Council President Jim King (D-10), who sat in on the committee hearing, grilled McGuire on the concept as a whole, perplexed at the notion that the burden of caretaking would shift from homeowner to creditor. (King also hails from a professional banking background.)

Particularly, King questioned the section of the ordinance requiring creditors to inspect the home for possible vacancy “prior to” filing a complaint of foreclosure. “How can we force somebody to do that if under state law they have the right to file foreclosure anytime they want to?” he asked.

Pushback from banks and those with roots in that industry doesn’t surprise Jane Walsh, the strategy and development coordinator with the Network Center for Community Change. She devotes much of her time to the ongoing dilemma of foreclosures and the urban decay that follows.

“My sense is that banks are heavily burdened by the foreclosure crisis,” she says. “They are spending more and more of their energy trying to manage foreclosures and properties they actually don’t want.”

Contention over registry ordinances similar to the one being proposed in Louisville has surfaced most notably in Chicago. Last year, the Federal Housing Finance Agency, which oversees lending giants Fannie Mae and Freddie Mac, sued the city. The FHFA contended the ordinance imposed all the responsibilities, but not the benefits, of ownership of a vacant property (i.e. selling or leasing). Also, the FHFA felt Chicago was overstepping its jurisdiction in imposing regulations on Fannie and Freddie.

Since the lawsuit, Fannie and Freddie (as well as the banks and services they work with) have complied with the ordinance “under protest.”

One major difference between Chicago’s law and the one up for debate in Louisville? Fees. Chicago charges creditors a $500 registration fee when filing a foreclosure. (In St. Paul, Minn., the fee tops out at $1,100.) Louisville would charge $75. Penalties for non-compliance in Chicago are up to $1,000 per day. Here, that number drops to $100.

“I’m thinking most of our banks will see a $75 fee as a reasonable cost,” he says. “So maybe we don’t get the pushback if the fees aren’t quite as high.”

But Monday evening, skepticism remained. Downard pressed McGuire for specifics: Of the thousands of blighted homes in Louisville, how many would this new ordinance actually address? It’s a question McGuire could not immediately answer, but one that other agencies have started investigating.

Colorful maps of Shawnee and Smoketown hang in the cream-hued hallways of the Network Center for Community Change’s (NC3) downtown office. As part of an ongoing community-mapping project, funded through a Habitat for Humanity grant and the Louisville Metro Housing Authority, NC3 has plotted vacant homes in these two neighborhoods. Brick-red rectangles outline properties that have gone through foreclosure in the last few years.

According to their data, in Shawnee, 389 of the roughly 3,900 residential properties sit vacant. Of the 389 vacant structures, 71 were sold at foreclosure between 2008-2011. Less than half of the 71 remain in the hands of financial institutions.

NC3 has mapped most of Smoketown and found 97 vacant properties out of 470 residential lots. Of those 97 properties, 13 were foreclosed on between 2008-2011. Banks currently own just a handful.

Of course, some of these vacant properties may have been foreclosed on before 2008. Walsh says a majority of these empty homes could have resulted from the death of an owner or, perhaps, a shoddy landlord.

Walsh believes their mapping indicates this ordinance may not result in widespread, dramatic improvements.

“This seems to be a little piece that may make a difference, “ she says. “What it will do is reach a subset of a subset of the problem. That seems as good a place to start as any.”

But Walsh holds a few other worries with the ordinance. Will creditors simply fold fees and penalties incurred from the ordinance into the total cost of foreclosure, further burdening struggling homeowners?

Despite her concerns, Walsh supports the idea.

“So this is a strategy to deal with the facts that banks do walk away,” she says. “There’s no doubt about it. We’ve seen it for years.”

Still, she’d like to see Metro push for other legislative changes, like creating a stronger, more efficient landbank and ending the sale of delinquent tax liens to third-party investors, a process that often buries homeowners under large fees that can lead them to lose their home.

Councilman Blackwell recognizes that this proposed ordinance “isn’t a cure.” However, he feels Louisville should embrace potential remedies.