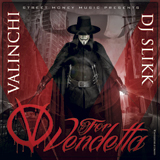 Some albums are endurance tests. Twenty-seven songs about chaos and foolishness and unearned bravado was exhausting to get through once, much less the number of times it takes to feel as though one can write with enough perspective. Sadly, after multiple listens, my review can only approach the same superficial level of the disc itself. Money? Get it. Grind? Do it. Women? Fuck ’em. After two meaningless album intros, the first song has what is the best worst hook I’ve ever heard, including the line you ain’t a bad female dog unless you fetchin’ my dick. The following 20-some tracks only furthered my PTSD. Louisville has quality hardcore hip-hop available. This is certainly not an example.