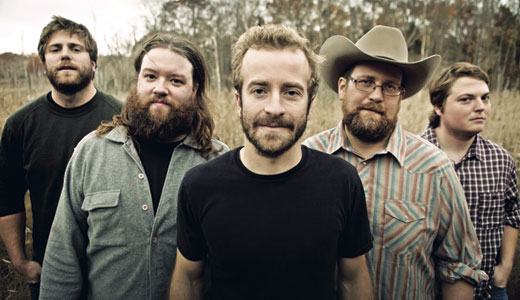 When Trampled By Turtles hit the road, they make it work. The Minnesotans return to Louisville after less than five months away, and this year has seen them play everywhere from “Letterman” to CNN to SXSW. Their sound is flexible enough to get them booked at many festivals. “You name one, we’re probably playing it,” agrees mandolinist Erik Berry.

“We did a 21-day tour that had 19 or 20 actual performances, contracted gigs,” earlier this year. “And we did an additional 12 appearances or recording projects: in-studios, in-stores, radio station appearances. Something like 30 appearances in 21 days,” Berry summarizes.

A couple of the members are family men now, and they’ve instructed their management to send them on the road for shorter but more intensive periods. “Time home is important, so when we’re out, we’re like, ‘Work us.’”

One way Berry has managed to balance work and family is “I went and turned my oldest into a fan of the band. That helps a lot,” he laughs about his 5-year-old. “The only other record (of ours) I listen to with any regularity is Palomino, and that’s because that’s the one my son likes so much.

“There’s tricky stuff I have to deal with, like him wanting to hear ‘Wait So Long’ 10 times in a row in the car, but … As opposed to him being like, ‘Why do you have to go out on the road again?’ He gets it.”

Stars and Satellites, the sixth full-length album for the bluegrass-inspired quintet, was released in April on their own BanjoDad label and debuted at No. 32 on the Billboard charts. They had recorded it near their Duluth homes, focusing on getting it right fairly quickly so they could see their families at the end of each day. The collection features some slower, more somber songs than the band has previously tackled.

“It was the batch of songs that (singer/guitarist) Dave (Simonett) had for us,” Berry says. “About six songs into the project, we were like, ‘Well, this is gonna be a little bit slower than other ones. Are we OK with that?’ But we were enjoying the tunes so much that it seemed like, ‘What are we going to say? This isn’t any good? This isn’t fun’? We liked it.”

Simonett was one of the new dads, contributing to his altered state of mind. Additionally, various friends and members of the band members’ families passed away between albums. “Grandpas got lost. Stuff like that,” says Berry. “I know that was going into his head.”

Though the band would surely be glad to have a big radio hit, or find some other way to spend less time touring, they can’t say they’re not glad to return to Louisville.

“We’ve recorded a couple of our videos down there,” Berry recalls. “The live footage for ‘Where Is My Mind?’ was shot at Headliners, and then both ‘Victory’ and ‘Wait So Long’ were shot in Louisville.”

“We didn’t know what the deal was, but a few years ago, outside of Minneapolis and Duluth, our strongest retail was Portland (Ore.) and Louisville, Ky.!”