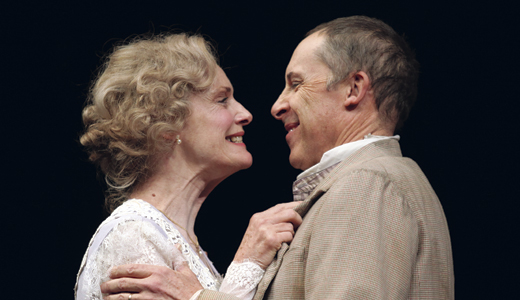 Family. Regret. Addiction. Illness. Memories. This is Eugene O’Neill’s autobiographical opus truncating several instances from his life into a single day of the Tyrone family. James is the alcoholic father. Mary, the mother, is addicted to morphine. The two sons, Jamie and Edmund, are both alcoholics as well. It’s not your cheery night out with some problems solved and some happy high jinks culminating in a nice, tidy ending. If that’s your thing, this show isn’t for you. If, however, you like some meat to your theater, “Long Day’s Journey Into Night” is right up your alley.

The play is not easy — not just for the actors performing it, but for the audience watching it. The themes are so naked and bare and honest that some moments can be hard to digest. But that’s often what great theater does: It grabs you, shakes you and tries to get you to think about what you would rather not.

Simply put, the script is a masterpiece. It’s about family love, addiction and illness, but at its core, it explores the harrowing sense of regret — this overwhelming sense of not following the path you were meant to follow and what that can do to your soul. It’s set entirely in the family room of the Tyrone summer home, and the design by Antje Ellerman was simple but evocative of James Tyrone’s miserly ways, and provided a wonderful canvas for Les Waters’ quiet and thoughtful direction. This is Waters’ directorial debut as artistic director of Actors Theatre.

And the performances were electric. David Chandler as James Tyrone is both endearing and maddening as the father who drinks whiskey at noon and stops when he passes out. As Jamie, Michael Bakkensen shines in the final scene, where he’s trashed, without falling into caricature, and he’s hilarious while still being honest. John Brummer was heartbreaking as Edmund, who’s just been diagnosed with “consumption” and has been urged not to drink but still can’t stop pouring out a shot every 10 minutes. Lisa Emery as morphine-addicted mother and wife Mary was sublime. Her descent into the ghost of her memories was chilling, devastating and ultimately so eloquent and disarming that her performance alone is worth the price of the ticket.

It’s not called “Long Day’s Journey” for nothing. With four acts and an intermission, it clocks in just under three-and-a-half hours, but I wasn’t bored for a second. Waters has introduced himself to our theater community with a brilliant production filled with tragedies, truths and beauties.