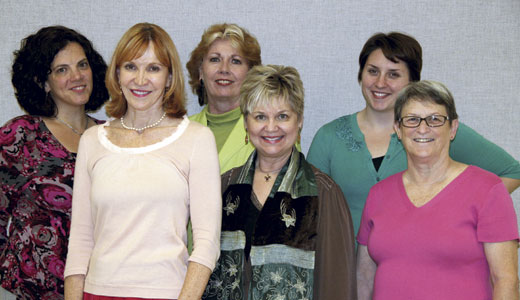 It was all about timing for the ladies of the newly formed Eve Theatre Company, which grew out of a group of longtime friends who’ve done lots of local theater together and dreamed of starting their own troupe. For nearly four years, it was just an idea — they had figured out their mission, which was to present shows that explored women’s perspectives, but were without a perfect first project. Just when they were ready to accept that it may not work out, things started lining up.

“The minute I saw (‘Love, Loss and What I Wore’), I knew we had to bring it back here and do it, but that was a couple of years ago,” says Susan McNeese Lynch, a cast member and one of the “original Eves.” “We applied right away for the rights, but we were turned down. They told me to apply again July 1 of this year, and I did, and right before that, Nora Ephron passed away. So I thought, ‘Are we going to do this? Because I’m sure they’re going to tie these things up.’ And they didn’t. We got the rights right away.”

“It seems like one of those things that’s just meant to be,” director Nancy Hoover says. “Everything has fallen into place so beautifully for this company and for this show.”

Co-written by Nora and Delia Ephron, “Love, Loss and What I Wore” is a theatrical piece based on Ilene “Gingy” Beckerman’s best-selling memoir. It was off-Broadway from 2009 until this past March and won the 2010 Drama Desk Award for “Most Unique Theatrical Experience” and the 2010 Broadway.com Award for “Favorite New Off-Broadway Play,” with casts that have included Marlo Thomas, Rosie O’Donnell, Samantha Bee, Kristin Wiig, Parker Posey and Brooke Shields. The show is set in a staged reading format, where five women sit and speak directly to the audience about the joys and woes of womanhood — including mothers, wedding dress shopping, being “bad at purses,” breast cancer, and the magical powers of black clothing.

“My experience seeing this show was that the audience gets pretty involved,” Lynch says. “The audience talks back, relates, lets out a lot of vocal approvals or disapprovals. So I think the evening of entertainment is going to be enhanced by the fact that there’s a real give and take between those of us who are representing this material and the people who are watching it.”

Seeing the show would make a fabulous girl’s night out, but it doesn’t have to — the members of Eve all insist they don’t want to exclude men or push women’s issues in an overbearing way. Grab some friends and any gently used business attire you’ve been meaning to get rid of, as Dress for Success will be there collecting for women who don’t have professional clothing for job interviews.