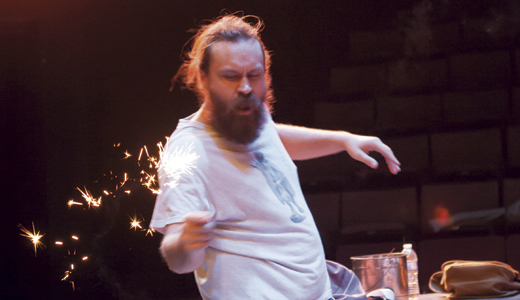 ‘The Aliens’
A Theatre 502 production. Directed by Mike Brooks. Written by Annie Baker. Continues through Oct. 13 in the Victor Jory Theatre at Actors Theatre, 316 W. Main St. For tickets, go to theatre502.org or call 509-1595.

Heroes and villains. Obstacles overcome. Damsels rescued. Reversals, transformation and redemption. The arc of character development. These things are so comfortably the stuff of narrative that almost as soon as a “new” story begins, we know how it will end. The only open question is: How will the storyteller get us there?

But now and then a storyteller has the nerve and imagination to explore a completely different path. Playwright Annie Baker is that sort of writer. And I defy anyone watching the opening sections of her 2010 Obie Award-winning play, “The Aliens” (with music and lyrics by Michael Chernus, Patch Darragh and Erin Gann), now running in a Theatre 502 production at Actors Theatre, to predict anything whatsoever.

When New York Times critic Christopher Isherwood reviewed “The Aliens,” he called it a “gentle” work and invoked the names Chekhov and Beckett. That makes little sense to me. There’s nothing gentle about the way Baker gives us three characters at first so soaked in stereotype that everything they say and do draws mocking laughs from the audience. And though you can discern Beckett’s influence in this script — especially in its static images and one heart-wrenching minimalist soliloquy — “The Aliens” strikes out in quite different directions in language and emotion from both Chekhov and Beckett.

The play is set in a lot behind a coffee shop — a staff smoking area that smells so bad employees seldom use it, except when they’re carrying trash to the Dumpster (scenic design by Karl Anderson, lighting by Jesse Alford). But two 30-something hipsters have taken to using it as a haven from the rest of the world. KJ (Brandon Cox) is a thickly bearded college dropout who is obsessed with the abstract emptiness of formal logic. His inability to make intimate human contact probably triggered the nervous breakdown he suffered years before. Jasper (Scott Anthony), his only friend, is an aspiring novelist who has just broken up with his girlfriend — and may have some obsessive tendencies of his own: In the wake of the break-up, he sat down and wrote 20 pages that completely changed the direction of his novel. These two were once in a band. Or, rather, they once spent a lot of time coming up with names for the band they would be in, if they had a band.

Then there’s Evan (Zachary Burrell), a high schooler who works at the coffee shop and whose diffidence — much of what he has to say sums up as “Um. I don’t know. Maybe. Yeah.” — suggests he’s on track to wind up much like KJ and Jasper.

Director Mike Brooks is bold enough to let his characters languish in cliché just long enough for an audience to get squeamish about the whole affair. But in time, these characters do find an oh-so-illusive form of redemption, in sparklers and fireworks, in a defiant, compassionate phone conversation, and a flash of smile that disappears as the lights go down.