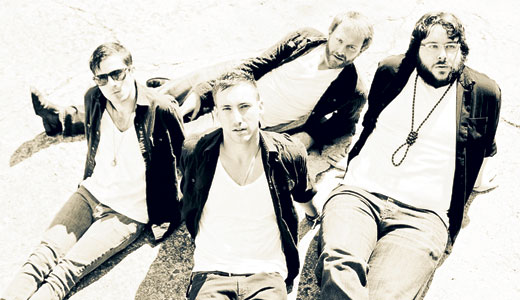 The Pass have been taking a shot at surpassing VHS or Beta’s ability to fill up venues with ’80s-style arena-sized hooks, grooves and beats for two and a half years, and now find themselves at the edge of glory. They’ve toured around the country, made popular videos and been heard on a half-dozen TV shows — but can they take it to the next level?

Their second and latest full-length album, Melt, will be released officially on Nov. 6 (though copies will be available at their 18+ Headliners show). It took a couple of years to get here. They wrote 30 songs, recorded 20, then picked 11 favorites.

Bassist Will Roberts is especially proud of singer Kyle Peters’ lyrics this time around. “The lyrics are cool and really original. That’s one of the things that makes us a weird band, I guess; our songs are kind of poppy, but you’ll never hear a lyric like an Ooh baby baby type thing. The lyrics are really deep. I’ve asked (Kyle) before, ‘Dude, what’s going on here?’ He explains them, and I’m like, ‘Oh, man!’” exclaims the impressed New Jersey native. “… ‘I’m not just saying that because you’re my roommate and my good friend. That’s sick!’”

“Psycho” is a song on the new album that Roberts, who wrote the music, points out for Peters’ contribution. The singer came up with a story about a long-term relationship ending, leaving the protagonist in a fragile state. Roberts says the second verse is his favorite on the album: You’ll want to be ready, when the voices start to call your name. / And you’ll try try to ignore, but it’ll fall like rain when you’re trying to stay dry. / And it’ll test your patience, it’ll test your mind.

At first, he hated what he heard coming from Peters’ voice. “Sometimes you can’t tell what he’s saying when he’s singing, that’s just the way he sings … a lot of people have trouble understanding him sometimes, the way he phrases stuff.” When he read what his singer had written, though, Roberts was “amazed.”

Growth has been a focus for The Pass this year. For their first year and a half together, they were happy to just play “straight-up, loud, raucous dance music.” But, Roberts says, “We got better at writing songs.”

They didn’t want to completely change styles, but “you can only do so much, trying to play a four-on-the-floor dance beat and write music to it. We’re sick of it a little bit. We still want to do dance music, but I think that’s why there’s more quote-unquote rock tunes on this album. More song-oriented.”

The band has begun seeing some early success in unexpected places.

“We get random comments on Facebook, like from Arizona. ‘Hey, we heard you in The Gap!’” he laughs. “That’s the coolest thing in the world. I just saw the royalties lately — we’re getting checks for, like, $2,000 from The Limited or something. Like, ‘what?’”

And so far, the biggest challenge they’ve faced is deciding what to be called. “Naming bands is the hardest thing ever. It’s just such an important thing, and everything you think of, you find a reason not to like it. It’s like naming a kid, I imagine — although kids have their own names. You can’t name a band ‘John,’” Roberts laughs. “I guess you could, that would be original.”

The Pass with The Deloreans and Skyscraper Stereo