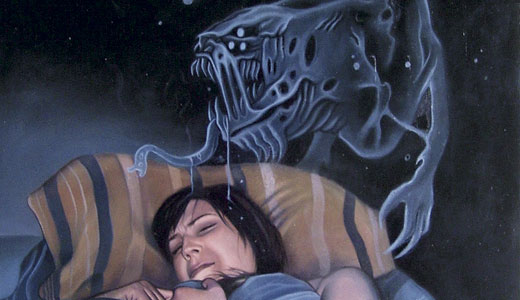 Cleveland-based bands aren’t really known for their national recognition. After all, when Pere Ubu is one of the “Rock ’n’ Roll Capital of the World”’s biggest claims to fame, it’s hard for natives like myself to brag about the local scene. But Mr. Gnome is the kind of powerhouse duo that’s working hard to dispel the rumors that Cleveland is just a sad city with a hopeless football team. Nicole Barille and Sam Meister play the kind of experimental art rock that alternates between creepy psychedelia and murky pop. They don’t stop at music. Their 2011 release, Madness in Miniature, follows the same concept as their graphic novel and a soon-to-be-released live-action music video. Mr. Gnome kicks off its fall tour right here in Louisville. —Danielle Sills

‘An Evening with Poe’

Whether writing about a man losing his mind while mourning a lover or a murderer going mad upon hearing the heartbeat of his deceased victim, Edgar Allan Poe is the master of mystery, from the ethereal to the macabre. And ’tis the spooky season to celebrate Poe’s works, which the Frazier History Museum will present during “An Evening with Poe.” This year’s performance includes eight of the author’s best-known tales (six poems and two short stories) set to original scores written exclusively for this event by The Tamerlane Trio, which includes members of Squeeze-bot, Sandpaper Dolls, and Fire the Saddle. Tickets include access to the museum’s permanent galleries, and there will be a cash bar (stocked with casks of Amontillado, perhaps?). —Sarah Kelley

Like fellow all-female Americana songstresses The Wailin’ Jennys, none of the members of The Trishas personally share their band’s namesake, but they do both create well-crafted vocal harmonies layered with twang, sweetness and strife. Based in Austin, Texas, The Trishas just released their first full-length album, High, Wide & Handsome. Individually honing their talents in Memphis, Nashville and on the Texas Opry circuit, it is no surprise that when they come together, The Trishas are a country music powerhouse. Their debut album chronicles the Trishas’ individual highs and lows of starting one’s own family, as many of them recently became mothers. Known for often taking their babies on the road, you may even be in the company of their bundles of joy when The Trishas play Fourth Street Live Thursday. —Kelly Kettering

The 21st century might turn out to be the one where women begin achieving something like true equality. If that’s going to happen, we’re going to need a lot more school-age girls to pick up an instrument and lay waste to the Maroon 5 and Third Eye Blind d-bag brigades who have gutted the soul of rock ’n’ roll. It’s a shame that we even still need to discuss this in gender terms, but blazing female-centric bands like Chicago’s The Cell Phones and Louisville’s She Might Bite are still the exception in rock. They’re certainly not without precedent; The Cell Phones’ latest EP, Hospital Spaceship, sparks memories of some earlier examples of women kicking it better, like ESG and Sleater-Kinney — and includes a musically skilled anti-tribute to convicted lady-killing producer Phil Spector. —Peter Berkowitz

This satire by David Mamet, presented by the Louisville Repertory Co. and directed by J.R. Stuart, takes the audience into a single day in the life of a beleaguered American president. In the story, incumbent Charles Smith (Sean Childress) faces grim re-election prospects. But in a swirling, angry sea of political tidal waves, he finds the time to pardon two turkeys in advance of Thanksgiving — and this seemingly innocuous PR move inspires the commander-in-chief to risk everything to win back public support. Hilarity ensues. If you go, be prepared for a take-no-prisoners look at the state of America and the lengths to which people — politicians in particular — will go to win. —Kevin Gibson

What happens when the local farmer meets up with the social justice advocate who was hanging with the eco steward and the minister, who had a lunch date with the peace activist and the artist? It’s the ultimate vision of the Mighty Kindness Harvest Hootenanny, which aims to create a commonwealth full of respect, beauty and compassion, and the annual festival is taking place Saturday at Waterfront Park. Expect friendly folks — hippies, hipsters and everything in between — talking about important things like life, love and the pursuit of happiness. There will be two stages of music featuring Blunt Honey, Nick Peay, Andrea Davidson, Leigh Ann Yost, Kathleen Hoye and lots more. Peace and love, my friends, peace and love. —Sara Havens

Here we are at the time of year when darkness creeps in ever earlier and earlier. So what can you do about that? Maybe find a cozy hiding place? Thriller writer David Bell has just released a new novel entitled “The Hiding Place,” and he’ll be reading and signing at Carmichael’s Saturday afternoon. This story shows the aftermath of a child’s disappearance, with repercussions taking decades to arrive for the victim’s family and others involved. Just as he did with earlier book “Cemetery Girl,” Bell displays an exceptional sense for keeping the procedural details moving forward — but he also keeps them in perspective. This Western Kentucky professor writes about people experiencing a tragedy that may seem to come and go in a single moment but is actually setting a new course for many lives — each of which will now have newly decisive and demanding moments. —T.E. Lyons

Churchill Downs opens Sunday with four weeks of racing through Thanksgiving weekend. The Fall Meet is traditionally strong, with a mix of races for accomplished older horses and tests for 2-year-olds completing their first season of racing. The lone “Downs After Dark” night racing event is Saturday, Nov. 17, with a Roaring ’20s theme: “The Golden Era.” Thanksgiving Day first post time is 11:30 a.m. Reservations required for Thanksgiving Day dinner — and you’d better hurry, as it always sells out early. The Clark Handicap is slated for Nov. 23, with all races Saturday, Nov. 24, carded for 2-year-olds, including the Kentucky Jockey Club Stakes, which is part of the new qualification prep series for the 2013 Kentucky Derby. —Bill Doolittle

Into It. Over It.

Chicago act Into It. Over It. play a very particular kind of indie/emo hybrid (established in the mid-’80s with acts like Rites of Spring and Embrace) that privileges delicate melodies over heavy guitars. A one-man band helmed by singer-songwriter Evan Weiss, this tour marks the first time the project has traveled as a full ensemble. Weiss created the concept album 52 Weeks, completing one song per week for a year. Now being released by No Sleep Records, the album will be available when the band performs at Vernon Lanes as either a two-disc CD set or as a four-LP collection that includes a 52-page art book. Joining will be Connecticut pop-punk acts Make Do & Mend and Hostage Calm, along with Mike Kinsella’s Owen, and locals Fast Friends. —Syd Bishop

AquaVenture is one of the top exhibitions put on by the Kentucky Watercolor Society. This year’s juried show features 39 paintings by 29 artists. The organization was formed in 1977 to promote the painting medium of watercolor. Since then, its membership has increased to more than 400 artists. The annual show tried something new in 2012 — usually open to members and non-members working in watercolor, they decided to accept other water-based media such as gouache and acrylic. “We want to include more artists in Louisville and Southern Indiana, to expand (AquaVenture) to make it one of the best shows in the area,” says director of exhibitions Nevenka Martinovic. The exhibit will be open during the Oct. 26 FAT Friday Hop. —Jo Anne Triplett

Luscious red strawberries, delicate green cabbages, vibrant yellow squash. No, this isn’t my grocery list, or the recipe for a very colorful salad, but a few of the images featured in the Green Building Gallery’s latest exhibit, “Local Fare.” The group show, curated by Daniel Pfalzgraf, revolves around food, from its preparation and presentation to agriculture and consumption. Its goal is to explore our relationship with food and the intersection of cuisine with fine art. Local artists Ashley Stinson and Devin French contribute eye-catching photographs and sleek sculptures; however, the show is not 100-percent locavore friendly — there are works by artists from New York, Philadelphia and more. Pfalzgraf hopes the show will encourage people to take a closer look at their grub, and to explore what happens if we are, in fact, what we eat. —Jennifer Harlan

When K.A.S. Gallery says they’re “more than a visual art gallery,” they mean it. In addition to their space in the Mellwood Arts & Entertainment Center (where they offer yoga and dance classes, wine nights and art), their roster now includes K.A.S Gallery’s Spirit & Bottega on Frankfort Avenue. The featured artist in the new space is Bosnian Fahrudin Omerovic, who moved to America in 1997. “My work explores the weird, unnatural and different aspects in life,” he says. “I have a voluminous love for the weird and in part, my subject matter becomes a reflection of that. My goal is to … ultimately leave the viewer satisfied visually and intellectually.” The grand opening of K.A.S Gallery’s Spirit & Bottega is during the Oct. 26 FAT Friday at 6:30 p.m. —Jo Anne Triplett