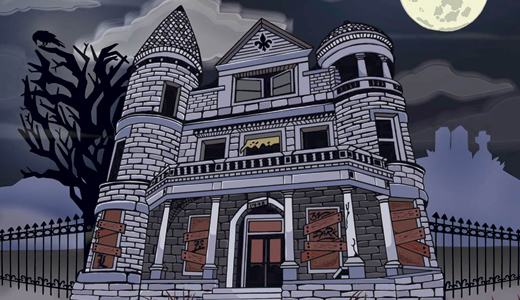 Something about fall makes it the season of nostalgia. Whether it’s the changing leaves or the pumpkin spices invading every coffee drink and seasonal beer in sight, autumn brings back memories of a simpler time. If the crunching of leaves has you longing for those golden days of yore, the new Coffee Cup Theatre Company offers the solution: an evening dedicated to that crackling genre of the past, where the only things in 3-D were the massive dials used to change the stations. I’m talking about radio, medium of fireside chats and, in this case, three spooky plays happening this weekend. Presented in traditional 1940s style, the evening features ghostly tales of superstition and revenge, from W.W. Jacobs’ “The Monkey’s Paw” to Oscar Wilde’s “The Canterville Ghost” and Edgar Allan Poe’s “The Cask of Amontillado.” —Jennifer Harlan

For his first show as artistic director, Les Waters stages Eugene O’Neill’s Pulitzer Prize-winning epic drama about a family of four who struggles to forgive one another after a dark, regretful past. “Long Day’s Journey into Night” is not commonly put on in this region and hasn’t been presented on the Actors stage since 1973. “It’s a titanic play for a quartet of extraordinary actors,” Waters says. “It’s the greatest play about family of all time, a play about love’s struggles and confusions and failed promises.” The cast is full of brand new faces to Louisville, including Obie Award-winning actress Lisa Emery. Chat with them face to face at “Cocktails with the Cast” on Oct. 18, or “Conversation with the Artists” on Oct. 21. —Jane Mattingly

Storytelling is the cornerstone of our cultural identity. It’s a means of interpersonal communication and a record of the human experience. It also happens to be a fun and compelling way to pass the time, hence the excitement surrounding the return of the Corn Island Storytelling Fest. This longtime local tradition ended in 2007 after three decades, but thanks to Metro government and U of L, the festival returns Friday. Bring your blankets and flashlights to the lawn outside Ekstrom Library and listen as several renowned storytellers spin spooky yarns suited for the season. The stories will be family-friendly until 8:30, at which point the tales will take a turn for the truly scary. You’ve been warned. —Sarah Kelley

The Los Angeles native (and former Oakland Raiders cheerleader) first broke out in comedy when she became a viral sensation with her YouTube clip “Nail Salon.” She has since gone on to be a cast member of “Mad TV” and shoot a one-hour comedy special for Comedy Central. She is presently working on putting together material for her second hour-long special, which should be out early next year. She has appeared on “Curb Your Enthusiasm,” as well as on the big screen in “Our Family Wedding” and “Alvin & the Chipmunks: The Squeakquel.” Johnson brings her unique Latina flavor to the Brown Theatre Friday night. —Brent Owen

Kentucky has a long tradition of supporting country and roots music, and that tradition continues Friday as London native Holly Golightly performs in support of her new record, Sunday Run Me Over. Prone to collaboration, Golightly has teamed again with the Brokeoffs, the one-man stage name for Texas-born multi-instrumentalist Lawyer Dave, for their fifth work together. Golightly and crew aim to tell stories and have a good time, and they prove that not only in their music, but also in their aesthetic. Recorded in a barn in Athens, Ga., their newest album celebrates simplicity in sound — and in the image they present. Joining them are touring act Daniel Wayne and local acts RedZag and Opposable Thumbs. There is a later show at ZaZoo’s, so make sure you get there by door time or you might miss out on a good time. —Syd Bishop

Combining Americana and rock, Ryan Bingham’s culmination of west Texas country gives it an edge that the Underwoods and Chesneys of the genre can’t touch. First perking up ears with songs like “Southside of Heaven” and “Endless Ways” on 2007’s Mescalito and 2009’s Roadhouse Sun, respectively, Bingham then collaborated with producer T-Bone Burnett on the soundtrack for Jeff Bridges’ touching 2009 film “Crazy Heart,” and Bingham even had a small part in the film as a back-up singer. In 2010, Junky Star was Bingham’s highest-selling album to date, breaking into the Top 10 on the Billboard rock album chart. Last month, he released Tomorrowland, an album that elaborates on the rock edge of Junky and even slightly dips into rockabilly. Check out Bingham and his band to determine which style of his you like the best. —Kelly Kettering

Literary types, rejoice. This weekend you take over downtown. Well, at least one very popular block. Held on East Market Street, the annual Writers Block Festival returns with panel discussions, readings and workshops in fiction, memoir, travel writing and more. (These can inspire you, solitary writer, who finds him/herself in tears when faced with a blank page.) Festivities begin with the InKY reading series Friday night at The Bard’s Town. On Saturday, the Green Building will serve as hub, hosting check-in and a print fair showcasing regional publishing. Also, local literary darling Carmichael’s will be on hand selling books by guest authors including Kentucky native Jim Higdon. He authored “The Cornbread Mafia,” a true-crime story about a large marijuana syndicate in Marion County. (Higdon will also speak at the event.) Pre-registration for workshops is recommended. —Anne Marshall

For years doctors (mostly men) called the shots when a woman went into labor: wheel her into the hospital, give her drugs so she doesn’t scream her head off, and if it’s taking too long, induce. But these days, an increasing number of women are taking control — communicating with health care providers and making informed decisions when it comes to having a baby. That’s the mission of Birth Care Network, a coalition of midwives, doulas, lactation consultants and other support professionals who will share their knowledge this weekend at the eighth annual Doulapalooza. The celebration includes live music, craft vendors, food and drink, as well as educational exhibits promoting positive, informed childbirth. —Sarah Kelley

The Douglass Loop will be blocked off for the 18th annual Belknap Festival. Seven bands are set to perform. Friday night is an appetizer of sorts — alt-bluegrass outfit The Hardware Project, which includes neighborhood mainstay Larry Horton of Horton’s Hardware and Naturally Horton’s, kicks things off at 6:30, followed by eclectic cover rockers Earbone. Music starts at 1:15 p.m. Saturday with bluegrassers Relic, followed by Alabama Brown and her band The Inside Outlaws (2:45), playing originals influenced by jazz, delta blues and hip-hop. Satchel’s Pawn Shop (4:45) returns to the festival this year after reuniting at last year’s to much acclaim. The hot R&B of Little T&A follows at 6:45, and the eclectic popsters The Deloreans take the stage at 8:45 to close the proceedings. Oh, and there’s local food and brews, plus juried arts and crafts and family activities. —Cary Stemle

“People go around haunted attractions, count heads the weekend before Halloween, and think, ‘Wow, this guy’s making a bundle.’ If it was that easy, everyone would be doing it,” explains haunted house consultant Leonard Pickel in “Screamer.” The documentary, which was made by first-time director William N. McHugh, follows the stress and drama of struggling haunt owners in Indiana and Louisville. It will premiere Saturday night at the Sheraton in Jeffersonville with a haunted house-style event followed by the film. As you can imagine, it’s not an easy business — a haunt in New Albany is shut down by the local fire marshal before it can open, actors and crew quit over missing pay, and bad business decisions wreak havoc on an industry viewed as “fun” and “easy.” Purchase tickets online and save $2. —Sara Havens

Hold your bloody horses, zombie enthusiasts. Don’t put that hacksawed torso away just yet. There’s another chance to dress up as a flesh-eating creature at “Wild and Woolly in the Woods,” an event that not only celebrates the local video store’s 15th anniversary, but includes a zombie hike through the forest, a costume contest and a screening of the 1974 cult classic “Let Sleeping Corpses Lie.” “It’s one of our all-time favorite movies and was one of the first movies we ever had at the store,” says W&W owner Todd Brashear. “At the time, it was really hard to find, and we rented it a lot. It seemed like a good choice for this event — a zombie movie that was part of our early history, but also somewhat obscure, which is what we’ve built our reputation on.” There will be beer from BBC and grub from Taco Punk as well. —Sara Havens

The godfathers of everything post-rock, Canada’s Godspeed You! Black Emperor, are embarking on their first album and tour in nearly 10 years, causing fans everywhere to lift their skinny fists in excitement. Like many things slow to rise, the build-up of a Godspeed You! song (or the release of this new album) may take quite a bit of time, but the pay-off is almost guaranteed to be satisfying. The film loops playing during the live shows also contribute to the band’s overall aesthetic, as the visuals fully round out the sensory experience involved in listening. You will have to wait until Oct. 16 to purchase their new album, Allelujah! Don’t Bend! Ascend!, but you have the rare opportunity to see them perform this week with fellow ambient noise makers Amen Dunes opening. Who knows? They may not come back again for another 10 years. —Kelly Kettering

The French have a phrase for it — jolie laide (“pretty-ugly”) — meaning something’s not pretty but is still alluring. “Oddly beautiful” is a way to describe the collection of paintings and sculpture in Aggie Zed’s current exhibition “Down to Earth.” The Virginia artist says her work is “a lifelong celebration of the beauty and strangeness …” Daniel Pfalzgraf, B. Deemer Gallery’s director of media services, has his own explanation: “Her work has a theatrical feel … but it’s often left up to the viewer to interpret what exactly is going on within the scenes. Viewing her work often has a feeling similar to that of overhearing bits and pieces of a child playing make-believe as they create fantastical worlds from their imagination, but matured to work through more grown-up scenarios.” —Jo Anne Triplett

Gallery at The Brown ?

This exhibition is an autumnal delight. We’re currently being teased with a few turned leaves of red, orange and yellow, with our full-blown season of bright colors still on the way. But if you’re impatiently waiting like I am, “Symphony in Pastel” may hold you over until the real thing arrives. These latest pastel landscapes by Lexington artist Anne Kindl are drawn in blocky-stroke abstractions, best viewed from a few steps back. But it’s the colors that dominate, be it in warm hues or rich blues and greens. “I want to establish communication first visually and then subconsciously, rendering the viewer in a state of contentment,” says Kindl. “Art and design have played a dual role in my life; both have the power to transform the mundane into something beautiful.” —Jo Anne Triplett