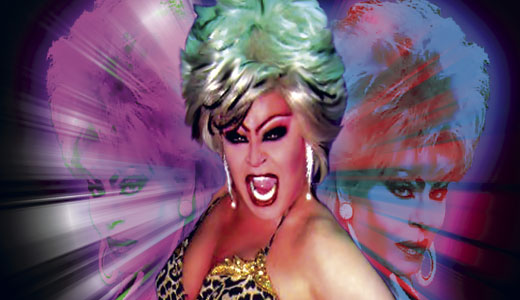 Tonight’s all-ages show features a full line-up of blooming acts, connected once again with Louisville and Chicago bands. Absolutely Not come fully loaded with songs from their debut, Extended, and plenty of Chicago love. One must appreciate their tightly wound song scheme; it’s aggressive, but not characteristically sloppy for a band labeled as garage rock. This will be the first show for Louisville’s fresh meat, Twenty First Century Fox. To see Julie of the Wolves is worth the trip alone. They’re a group of gals not to be missed, who rock hard while capturing the sweet vocal energy of the Softies. A consistent mesh of riffs askew are standing by to break the pitch of a ’90s band and reign with refreshing, angular twists. More support from the local scene comes from The Debauchees. —Lara Kinne

OK, what’s got eccentric style, royalty and a winning set of balls? Drag Queen Bingo! Forget the bingo of yore, confined to wood-paneled American Legion Halls and community centers scorched by fluorescent lighting. This evening’s Drag Queen Bingo at The Connection will surely bring laughter, sequins, prizes and — if you bring some cash — booze and snacks. You must be 21 to attend, and $15 gets you in on all bingo games. For the fourth year in a row, this event’s proceeds will benefit the Louisville Youth Group, the only organization in town dedicated to helping support LGBT youth through mentoring and a wide range of other programs. So get your daubers, good luck charms and funny bone prepped. Drag Queen Bingo always delights. —Anne Marshall

U of L Thrust Theater

The pressure of graduate school can make one start to feel a little nutty and maybe even hallucinate, especially at the worst times. During her comprehensive exams, theater student Beth finds herself haunted by her own subject matter, in the forms of Hedda Gabler and Miss Julie themselves. Steven Fechter’s thought-provoking dark comedy incorporates these 19th century theater masters to cleverly display the side-effects of poor mentoring, and the folks at U of L’s entirely student-run studio theater program are making it happen in conjunction with SIGS (U of L’s School of Interdisciplinary and Graduate Studies). The show is free and features Billy Flood, Ebony Jordan, Jennifer Levine and Cara McHugh, and is under the direction of Zan Sawyer-Daily. —Jane Mattingly

Does this qualify as a sad homecoming or a triumphant one? Kentucky native Jason Walz does indeed have a major accomplishment that he’ll be sharing at a signing at The Great Escape. His graphic novel “Homesick” is hitting store shelves this week. It’s a personal work, conveyed in a classic comic style that contributes immediacy — and its debut during Breast Cancer Awareness Month is no coincidence. Walz draws out the arc of his emotional state while his mother was fighting the disease. With supple black lines and straightforward text, he metaphorically sets his own experience against a far-removed character (very far — think Bradbury’s classic story “Kaleidoscope”). The kicker comes through the author-as-witness gaining insight into the commonality between the two forms of homesickness. That makes this a worthy addition to recent literature about surviving family loss. —T.E. Lyons

Sic Alps have a not-unpleasant tendency to sound like scraps of an overheard conversation interrupted by a 10-car pileup. To perhaps understand the stops and starts, the utterly lo-fi, heavily fragmented style, know that frontman (and only constant) Mike Donovan drives a cab in San Francisco when he’s not touring. On their new album, the new lineup ditches noisy home recording techniques in favor of a clear, crisp style (including some string arrangements), and the result is like graduating from The Crying of Lot 49 to Gravity’s Rainbow. While former versions have been mystifying, enjoyable and unique, this new recorded version is more cohesive, expansive and epic — without being yawnsome “epic rock.” However, expect a white-hot live performance — their set at the 2010 Cropped Out festival was one of the more blazing moments. —Joel Hunt

If you are interested in seeing the work of 100 ceramic artists in one spot, you are in luck. A local potter club, Louisville Clay, is celebrating its 10-year anniversary at the Weber Gallery. The reception is free and open to the public. Yes, artists will be there and snacks/beverages will be provided. Have plans Friday? Then stop in during gallery hours and see the show before it closes in December. With quirky delicate pieces and large utilitarian sculptures, there is surely something that will appeal. Besides, Louisville Clay has been contributing to our community by promoting, creating and celebrating ceramic art for a decade. It’s our turn to show them some love. —Mali Anderson

It’s time to put on your fancy pants and strut around the Galt House for a good cause. (That’s a typical Friday night for me.) The Beaux Arts Ball invites you to come out and play Saturday night in the name of supporting a couple nonprofits in town. The evening will feature drinks, dinner, a DJ and comedian Jessica Kirson, who has performed on “Last Comic Standing,” “The Tonight Show” and “Celebrity Apprentice,” to name a few. Host and emcee Bernie Lubbers will keep the party moving along in good fashion. And best of all, all proceeds go to Voices of Kentuckiana, an inclusive choir for LGBT folks and their allies, as well as Volunteers of America. Fabulous is mandatory, glitter is optional. —Sara Havens

Sure, I agree the quintessential motorcycle movie is “Easy Rider,” but my favorite cool rider film will always be “Grease 2.” Yeah, I’ve never been cool, so why start now? You can guarantee, though, that all the cool kids will be at Art Sanctuary Saturday night for “Thirty Three Quarters,” an art show that features 30 contemporary Midwest artists’ take on the traditional three-quarter motorcycle helmet. There will also be custom bikes there, and live music by Ride to Ruin and The Hot Wires. This show is also the first at the newly relocated Art Sanctuary in Germantown, is curated by WhiteNoise and presented by Devils Mustache of Columbus, Ohio. Even if you’re far from hip, throw on some black, zip up those skinny jeans, and find yourself a devil in skin-tight leather who’s gonna be wild as the wind. —Sara Havens

Financial struggles forced the Dance Theatre of Harlem to go on hiatus in 2004, and as the years progressed with no news of a revival, the fate of the contemporary ballet company looked bleak. But it turns out it wasn’t the end, just a lengthy intermission. The resurrected troupe will make its first public appearance in Louisville with the world premiere of “Gloria,” a one-act ballet. Virginia Johnson, the company’s new artistic director, told The New York Times, “Ballet is a way of elevating the spirit. It’s about being the most that a human being can be.” Which is exactly what Arthur Mitchell and Karel Shook had in mind when they founded DTH in response to the assassination of Martin Luther King Jr. Today, the arts organization continues its mission to present culturally diverse dance and train young people in classical ballet. —Sarah Kelley

A blend of striking old photos and informative text, “Louisville’s Historic Black Neighborhoods” brings the people and places from another era back to life. Part of the “Images of America” series by Arcadia Publishing, this book details the rich legacy of Louisville’s historic black neighborhoods chapter by chapter: Russell, Smoketown, Portland, Old Louisville, just to name a few. The book even includes a chapter on the tradition of black jockeys at Churchill Downs in south Louisville. The author, Beatrice S. Brown, brings hometown knowledge to this project. Born in Smoketown and raised in Parkland, Brown will take part in three book signings over the next few weeks. This weekend she’ll be at Barnes & Noble, the following Saturday at Walgreens at 34th and Broadway, and Nov. 3 at Books-A-Million. —Anne Marshall

Despite inroads made in pop and hip-hop, women still linger in the background of some genres, including what Rose Ledet offers as hers: “Zydeco Creole Rock Blues Funk.” Lingual in both English and Creole French, the 40-year-old “Zydeco Sweetheart” has been honing her musical gumbo for almost 20 years, building a following in the Louisiana/Texas circuit before heading out to recruit non-Cajuns. The singer/accordionist and band have released nine albums of dirty blues, dance-crazy grooves, and authentic Louisiana roots. Of her 2011 album Come Get Some, New Orleans’ OffBeat magazine wrote, “Come Get Some what? It’s a Rosie Ledet CD, so what’d’ya think? Sex, of course. Or, more precisely, decidedly female zydeco soul filled with double entendres and lots of hip-shaking grooves, a sound at which Rosie Ledet typically excels, especially in live settings.” —Peter Berkowitz

Do you like classic rock ’n’ roll and reading names? If so, Bobby Keys is your man. Actually, he’s been lots of folks’ man: The Texan saxophonist has played with Elvis, Joe Cocker, Harry Nilsson, Eric Clapton, Faces, Dr. John, Warren Zevon, Sheryl Crow, and all four ex-Beatles. Keys first met Buddy Holly and his Crickets in Lubbock, and got his grandfather to sign him over to them at 15 so he could hit the road. Oh, and he’s played sax for the Rolling Stones since 1969. Fittingly, it’s WFPK’s “Rolling Stones Radio Hour” presenting him here for this pretty unique event. Keys’ backing band for this show includes some other well-known road dogs, members of the Black Crowes, Georgia Satellites, Lynyrd Skynyrd and Poco. Truly almost famous. —Peter Berkowitz

May, Rhema and Curtin

The Tim Faulkner Gallery complex is in its usual overdrive this October. The current star on display is James Russell May, whose new exhibition “Peripheral” features his trademark depletions of the human body. His reception is Friday from 6-10 p.m. Also showing this month are Dan Rhema’s sculptures in “Art From the Other Side” and “I’m Talking to You” by Rosemary Curtin. But it’s not all visual art at this place. “Filthy Fifteen,” a CD release show with SweatWolf, Touch AC and DJ YNGSTEVE, is on Friday, Oct. 26, from 9 p.m.-midnight. Of course they have Halloween covered, with the Haunted Halloween Party featuring Matt Anthony on Oct. 27 from 7 p.m.-midnight, and the D’arkestra Halloween CD release show on Oct. 31 from 9 p.m.-midnight. —Jo Anne Triplett

What a way to celebrate your 10th anniversary in business! Former Glassworks resident Hyland Glass has found a great new space in the NuLu gallery district. The studio and gallery of Casey Hyland, it is continuing many of the traditions he started at Glassworks, including blow-your-own glass. True to the season, Hyland Glass is now featuring the Great Pumpkin Blow on Saturdays from 10 a.m.-4 p.m. through Thanksgiving. Due to the overnight cooling process, the glass is available to take home the next day ($60, ages 5 and up, appointment required). The next blow-your-own is a Christmas ornament for $40; they will start taking reservations during Thanksgiving week through the end of December. Look for their “Blow & Glow” events during First Friday Trolley Hops. —Jo Anne Triplett