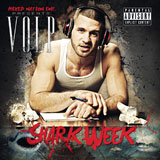 Why is his album called Shark Week, you ask? Because he’s the “Great White Hope.” Oy. Excuse me while I shake my head on the branding alone. Let’s recount the greatness by listing some song titles, straight out of the rapper cliché refrigerator magnet set: “Grind Harder,” “We Get It In,” “Poppin’,” “We On,” “Cash Game,” “Take Over.” Greatness, indeed. Funded by and featuring former Cardinal Luke Whitehead, who’s aiming to break into the national scene, splitting time between the 502, Cali and Atlanta — he’d be far better off focusing his A&R skills on some of the talented and hardworking emcees the city has to offer, not the cookie-cutter 1998 production and bland, anyone-could-have-written-this tripe that VOLP (“Vol-pee,” apparently, as he states repeatedly) showers us with on 15 unending tracks. Where’s Roy Scheider when you need him?