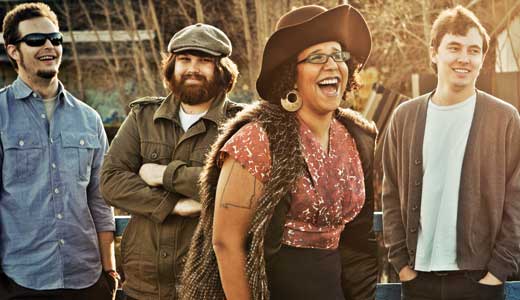 “Are there questions you’re sick of being asked?” LEO asks.

If there are questions Brittany Howard doesn’t want to be asked anymore, it’s questions such as How does it feel to go from a small town to stardom in a year? Has it been a whirlwind?

The 24-year-old singer for the breakout rock band of the year, Alabama Shakes, might be on the young side, but she’s a sharp character. Though willing to play the game to get her band’s music heard, she’s happier to talk about more everyday concerns.

Guessing as much, LEO asks if there are some questions she’d rather answer. Howard suggests, “What are your favorite foods?” “Who’s the best driver?” “Who snores the loudest?” and “Who got paid the most in their old job?”

When LEO spoke with her recently, she had been back home in Athens, Ala. (population: 20,000), for approximately one week. “I have no perception of time anymore,” laughs the former postal carrier, as she runs errands in her time between world tours.

Her band’s modernized fusion of soul and classic rock has won them fans like Adele, Jack White and Robert Plant; sold 300,000 copies of debut album Boys & Girls since April; and led to sold-out shows in numerous cities. “I think today’s Thursday, but I’m probably wrong. No, today’s Wednesday! I was close.”

Surprisingly, people have been leaving her alone at bars, but “when you want to go to Wal-Mart and buy some toilet paper …” she laughs. “I’m usually taking photos of people who work there. I’m a curiosity when I go in there, I guess. People want to know, ‘What’s your world like?’ Pretty normal, I don’t know.”

Other popular questions: How did you guys get together? (They met in the Athens music scene). Why are you named Alabama Shakes? (They came up with the name “The Shakes,” then added their home to it when they realized another band had the same name.)

LEO: What are your favorite foods?

Brittany Howard: The best place to eat in Athens, it’s called Burrito Bus. It’s just a little Mexican lady in a bus who makes the best tortas. It seems, generally, we eat a lot of Mexican food on the road.

LEO: Who’s the best driver in the band?

BH: It’s probably gonna be Heath Fogg, our guitar player. Oh, my goodness! Heath Fogg is the most responsible driver … I don’t see good at night. (Drummer) Steve (Johnson) drives too fast. One time, we were going down this mountain and he was going 90 miles an hour. I went, “Dude! This is freaking me out.” I was in the front seat.

LEO:: Who snores the loudest?

BH: (Bassist) Zach (Cockrell), for sure. Sometimes you get no sleep.

LEO: Who got paid more at their old job?