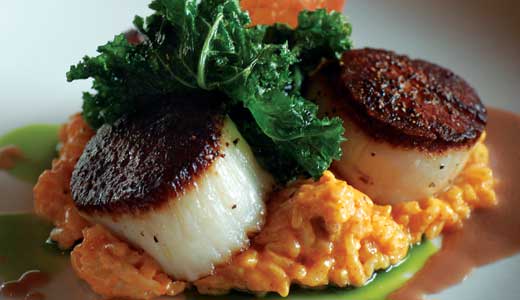 Turn the hands of your food-memory clock, if you will, back to 1987 or 1988. It was a very good time for Louisville restaurants — and when hasn’t it been?

The upscale bistro movement that had started with the Bristol, Formally Myra’s, Jack Fry’s and others a decade earlier had matured and blossomed. Our chop suey Chinese-American tradition had evolved into spicy regional eateries serving fare from Hunan and Sichuan. Fine French dining was here in the form of Le Relais. Authentic New Mexico cooking had arrived with Chico’s; our first sushi with Sachicoma, our first Korean hidden in the back room at Lee’s, and our first Thai at Thai Siam.

Frankly, local food lovers figured that we’d gone about as far as we could go. Oh, sure. Alice Waters had been doing some amazing things out at Berkeley’s Chez Panisse, buying her produce direct from local farmers and making their colors pop and their flavors sing. But that was California. No use pining for it here.

And then Kathy Cary came onto the scene. Building on her popular catering shop La Pêche, Cary amazed us with Lilly’s, a stylish, suave establishment boasting a farm-to-table menu (we didn’t have that term for it then) that made us forget all about faraway Chez Panisse.

But what has Lilly’s done for us lately? Well … quite a lot. Restaurants come and restaurants go, and sometimes an early peak segues into a long, slow slide downhill. Lilly’s, though, just keeps on keeping on. I realized to my surprise the other night that I hadn’t been back for way too long, so we got together with our friends David and Catherine, who are big fans of the place, and claimed a table for four.

The dinner menu is well designed either for noshing at the bar, drawing from the dozen soups, salads and starters for small-plates grazing; or for a more sumptuous repast from the well-chosen, heavily locavore main course menu. The starters range in price from $6 (for soup of the day, salmon tartare or Lilly’s outstanding fries) to $15 (for Maryland-style crab cakes). Just six entrees, plus daily specials, are priced from $17 (for the vegetarian Local Farmers Plate) to $32 (for seared sea scallops). A juicy bacon burger made with beef from the Old Hat Cattle Company in Prospect is $14.

Come back for lunch and enjoy Lilly’s at bargain rates, with a three-course prix fixe option priced at $16, and a dozen lunch dishes from $7 to $14.

Lilly’s beverage program is first-rate, including an appealing list of cocktails and a good mix of quality local beers and interesting imports. The wine list is diverse, largely forgoing trophy bottles (although the exception, Opus One for $300, is in line with current auction prices) in favor of solid choices from the world’s wine regions, mostly under $100 and with many in the $30-$40 range. We enjoyed a bottle of Qupe Santa Ynez Valley Marsanne for $38.

The Farmer’s Plate ($17) was a pretty arrangement of well chosen flavors and textures: a vegetable cake full of diced root veggies, a mound of fluffy quinoa, and a tasty retro dab of creamed spinach, all plated on a savory bourbon butternut squash velouté and garnished with crispy root-veggie chips.

A mahi mahi special presented a perfect piece of fish atop a veggie ragout, with wilted pea shoots as greens.

Desserts were from chef Amineh Elsherif, who Will described as “a septagenarian Kuwaiti immigrant and an amazing pastry chef.” Based on our picks, I’d have to agree. Apple crisp ($10) with cinnamon ice cream, frozen lemon pie ($7), and the signature Courtney’s caramel cake with caramel sauce and vanilla ice cream ($6) were all so delicious that they made too many calories go down easily.

We picked up the wine, which elevated our dinner for two to $115, plus a 20 percent tip.