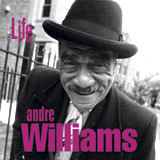 The gravel and consternation that comes with age is present in spades in Andre Williams’ latest, a combination of Dap soul and garage grit. Recording since the ’50s, the last 15 years have been much kinder to him than his first 60; several excellent albums on Bloodshot lifted him from the streets, where excess had left him. Life is his third record of 2012. The first featured Detroit guitar legend Dennis Coffey, the second The Sadies, but don’t feel we’re getting the short shrift here. The songs have a … vitality that isn’t in high supply on those other workaday records. The centerpiece is the tongue-in-cheek “Blame It On Obama,” a spoken blues detailing woes attributed to this president by his opposition. The kitschy track may have the shelf life of a milk carton, but it’s good fun nonetheless.