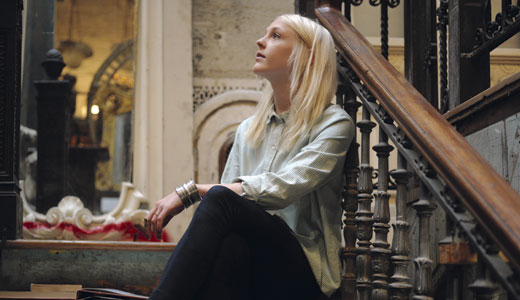 Laura Marling is a rising star back home in England and in larger American cities, but when the java lover walks into Sunergos Coffee before her show at Zanzabar, chances are she won’t be recognized. At 22, the prodigy has already released three albums of Joni Mitchell-esque folk/pop, earning acclaim but not yet breaking through commercially.

Though her low-register voice and classy accent hide her youth somewhat, she still has plenty to see and experience. Her fall tour takes her through some lesser-known parts of this country.

LEO: Was this tour your idea?

Laura Marling: Yeah, it was my excuse to come to those places. I’ve wanted to see them all for a very long time. I’m doing it in a simple way, just a guitar and a rental car.

LEO: Did you pick out the itinerary?

LM: Yeah, I did. I put pins on a map and sent it to the powers that be.

LEO: How did you pick Louisville?

LM: I have a friend from Louisville, Morgan, who told me a bunch of magical stories about it, and Kentucky is a place I always wanted to see.

LEO: How did you meet him?

LEO: Is he a performer?

LM: (laughs) A superfan. You can say that.

LEO: We have some well-known musicians from here, like Bonnie Prince Billy —

LEO: Have you met him?

LEO: He’s been around lately, maybe he’ll come out to see you here.

LEO: What are some of the other parts of America that interest you?

LM: I’m very much looking forward to New Orleans. I’ve never been that far south. I saw a lot of the West Coast last time I was here. That drive, in particular, the 101 … I’m a slightly romanticized tourist, I suppose.

LEO: That’s the fun of it, right? The escape and the fantasy of it?

LM: Yeah, exactly. I think I deserve to get lost for a little while.

LEO: Have you been feeling the pressures of the business?

LM: Yeah, I mean, the main idea behind this is to remind me of how simple it can be, if you put your mind up to it. You don’t need anything other than a bit of transport and a guitar.

LEO: Have you been writing new songs?

LM: Yeah, I actually just finished the fourth album. So that’s been really nice. That’s coming out in February, I think.

LEO: How did you approach recording this time? Any differently?

LM: Yeah, I’ve done this album, just me and Ethan (Johns), who produced my last two albums. Just me and him in the studio, really. He’s a very good percussionist and instrumentalist. Between me and him, we’ve done what we can to orchestrate it in a way that doesn’t sound like a band. It doesn’t sound like a group of us sitting down and playing live-to-tape. It sounds like instrumentation on top of songwriting.

LEO: What inspired the songs for this collection?

LM: Umm … that’s an interesting question. I don’t think I’m far enough removed from it yet to know. I think … whatever I’ve been doing in the last year. Whatever’s been occupying my mind. I think a continuing theme from the last album would be natural morality. But at the same time, it’s very, very different from the last album. It’s more of a story, this one. There’s characters in it. Yeah … I couldn’t really answer that question.

LEO: Is there a concept running throughout it?

LM: Yeah, I mean, I haven’t listened to it back yet. Kind of consciously. When I hear the mixes and the master, those shall be the only two times I’ll listen to it back. And then I’ll kind of realize the themes or the characters within it, because I’ve had a bit of space from it. But I haven’t had that yet.