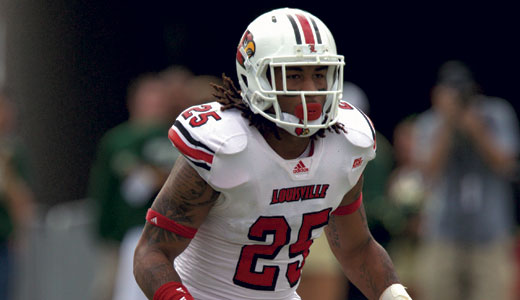 Calvin Pryor lines up where he can do the most damage. He’s a free safety for the University of Louisville football Cardinals, and his first duty is to guard the back gate. Make sure opponents don’t get loose for a score. That’s the safety part. But he’s also free to go around laying hard licks on ball carriers and pass catchers. Make tackles, sack the quarterback, and clobber guys so sharply they cough up the football. Pryor did all of that last year, as a freshman.

But this season, Pryor has been most concerned with the safety aspect of his position, helping the Louisville defense “hold the line” against barbarians pounding at the gate. And trying to keep the score down while star quarterback Teddy Bridgewater and Louisville’s vaunted offense have struggled at times to find their best stride. College football today is a scoring fiesta. Texas Tech dropped 49 points on West Virginia Saturday, and Indiana scored 49 on Ohio State — and lost. But Louisville scored 45 and won, snapping off a 45-35 triumph over Pittsburgh to bring its record to 6-0 halfway through the season, 1-0 in the Big East.

But it hasn’t been easy. The Cardinals have had to rally from behind to beat moderate opponents and needed a spectacular pass break-up in the final seconds to avoid being upset by North Carolina. Then a couple weeks ago, Louisville found itself in a Gulf Coast gully washer, but somehow came in out of the rain with a win.

“You’ve got to make a play when things are going bad,” Pryor says. “That’s when it’s the hardest to make a play, but you make one. Then somebody else makes one, and pretty soon you got a little momentum going.”

Louisville’s defense — making a play here, a stop there — got a little defensive momentum going late in the first half at Pitt, and the offense responded. Just like that, Bridgewater began lacing the ball to targets all over the field. The quarterback completed passes to seven different receivers in the game, including a spectacular diving catch by Eli Rogers and a jetaway 75-yard bomb to DeVante Parker. Oh, and Senorise Perry ran for four touchdowns, including a 59-yard dash.

Louisville coach Charlie Strong, who came up as a defensive coach, sternly states that the current Louisville defense, stocked primarily with sophomores, has not played well enough. But he notes that good things happen when it does.

“We didn’t come out of the gates at the beginning (at Pittsburgh), but the key play was right there at the end of the second quarter when we made a fourth-down stop,” Strong says. “We get the ball back, and Teddy connects with DeVante Parker down the sideline for a big catch, and we get the field goal” on the last play of the half.

College football can be like that: stop and go, and then go-go-go.

But the spectacular show in Pittsburgh came on a blue-sky sunny day. Things were different three weeks prior in the total downpour in Hattiesburg, Miss. Louisville trailed Southern Mississippi through the first half and couldn’t pass to catch up. That’s couldn’t pass, as in not humanly possible.

“Of course it was raining on both sides of the ball, but that’s the worst rain I ever played in,” says Pryor, a native of Port St. Joe, Florida, where football season sometimes coincides with hurricane season. “Standing on the sidelines, the water ran over your shoes. Up to your ankles. But we couldn’t let that bother us. We still had to go out and win a football game.”

“We were down 17-12 or some score like that — some odd number,” recalls Pryor. “What we had to do was score before halftime to get our momentum back. Then in the second half, our defense played excellent. And we ran the ball well. Just had to grind it out. Just one of those grind it out games.”

For a sophomore, the 6-1, 210-pound Pryor is pretty savvy about such things.

Louisville associate head coach Clint Hurtt realizes Louisville is a sophomore-freshman team that is a long way from maturity. But sometimes, he says, they grasp the basic concept of college football defense.

“Get the ball back to the offense. That is your job,” Hurtt says. “The switch finally clicked on for the defense in the second half of that game at Southern Miss. You don’t wait for somebody else to make a play. Go make it yourself. That’s when you get all 11 guys on the football field hunting for the ball.”

That’s not to say the defense is anywhere near its potential: It hasn’t shut anybody out. Can’t lockdown an opponent for an entire game. Plays good two series, then goes and checks itself out on Facebook and gives up a bomb. Almost handed North Carolina a free miracle. Some even say Louisville’s defense has taken a step back from a year ago, when it posted some very strong numbers.

Louisville plays all Big-East opponents the last six games of the season, with home games the next three Saturdays against South Florida (Homecoming, 3:30 p.m.), Cincinnati and Temple. Stakes are high. A league title carries an automatic berth in the Orange Bowl.

“We just have to keep our foot on the pedal,” Pryor says. “I know I have a voice on this team, and I know if guys see me doing my job, they’ll do theirs, and then you’ve got the brotherhood. You’ve got the team.”