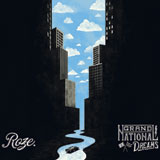 The return of Jalin Roze, 18 months after The Brilliance (an eternity in rap years), couldn’t come at a better time. It’s been a rough year for Louisville hip-hop; like the Republican Party, it seems the most viable candidates decided to sit out this cycle. As the year winds down and we start compiling our year-end lists, here comes the October surprise. Grand National Dreams is, simply, great. My counter shows more than 100 plays, many of the lyrics now memorized. The title is a double entendre, a paean to the 1980s car, but more fittingly, a horizon-deep look at the future — a glimpse to Jalin’s expanse beyond our borders and to his grand national reality. The last track, a spoken liner note of sorts, is the only skipper in the bunch (nice, but unnecessary for repeated listens).