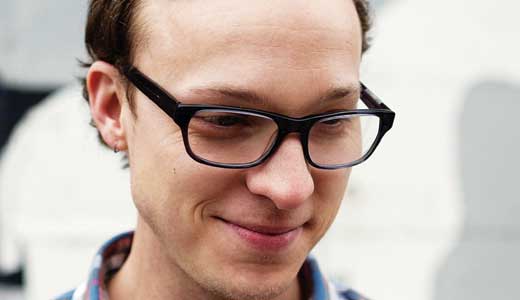 Ben Sollee doesn’t just comb his hair, throw on a tie, and head out to the club. An average night for him is a unique event for everyone else.

Known for riding his bicycle (with cello onboard) to concerts, Sollee encourages fans to bike, walk or use public transport to get to his show. (“There will even be bike valet at some of the shows,” he notes.) Those who do will receive a $5 voucher toward his merchandise, “on the honor system.”

Sollee plans to “change up” Headliners a bit for his shows, adding seating options and different lighting.

Oh, and there’s also the music. He’s playing an octave mandolin on this tour, joined by bassist Luke Reynolds and percussionist Jordon Ellis … and a special guest or 12. (The serial collaborator joined numerous acts onstage at this summer’s My Morning Jacket-curated Forecastle Festival.)

The Lexington native has spent a lot of time in Louisville and has the fan base to show for it, as his two-night stand here proves. The most popular pop-R&B-classical-folk-rock singer-cellist in the world has just released his third full-length solo album, Half-Made Man, and buzz continues to build for Sollee. From Kentucky to NPR to Hollywood, it seems like a good time to be in the Ben Sollee business.

“That’s a wonderful hope, and expectation, to have,” Sollee says. “There’s no way to guarantee that, but I think if you go out and play a good show, and you connect with the community in those towns, there’s no way to not grow.”

Half-Made Man’s title song, in particular, reflects his ongoing growth process. Sollee thinks a lot about community and the role his work plays in it. A short film called “Wooden Box,” focusing on his school workshops, debuts at the Louisville International Festival of Film on Saturday afternoon.

The album was funded in less than 48 hours by 410 donations sourced through the Pledge Music site, many from Louisville (with some of the funds raised beyond the goal amount being donated to Oxfam America).

Having performed much of his earlier albums alone with multiple overdubs, Sollee this time spent two weeks in Louisville with a group of musicians at Kevin Ratterman’s studio, playing live-to-tape.

He’s pragmatic about the financial realities of his field, allowing that he, the artist, is also a “product.” Currently attempting to manage his business himself, the 28-year-old husband and father oversees every detail.

It’s not his first time around the track, and Sollee says he began learning how he wanted to make the industry work for him while touring with the successful Sparrow Quartet, alongside Bela Fleck, Abigail Washburn and Casey Drieesen, between 2005 and 2008. Too much time spent in airplanes (“lots of all-over-the-placeness”) led him to seek a slower, more sustainable path — though the game still occasionally requires, as it did last month, that he travel between places like Los Angeles, New York and Kentucky all within one week to publicize the new album.

Sollee attributes some of his insight to his work as a teen stagehand on Lexington’s “Woodsongs Old-Time Radio Hour,” where he was able to learn from hundreds of artists.

“I came into this industry having a really solid idea of what it meant to get involved in this … I had very realistic expectations when I came in. However, learning how to bend and manipulate yourself as quickly as the industry is changing is really, really tricky.”

Fans will note that his first solo album was titled Learning to Bend.

One artist he learned from was legendary singer and civil rights icon Odetta. They talked about stage presence, as well as social issues. “The impression she left on me was, you just have to tell your story and let folks get involved with it.”

If there’s any doubt left about what his story is, his Pledge Music profile describes him as “Cellist, Singer, Cyclist, Dad, Human.”

When you invest in his music, Sollee says, “I want people to know that it’s a locally made product that’s socially conscious, that has some ethics to it.”