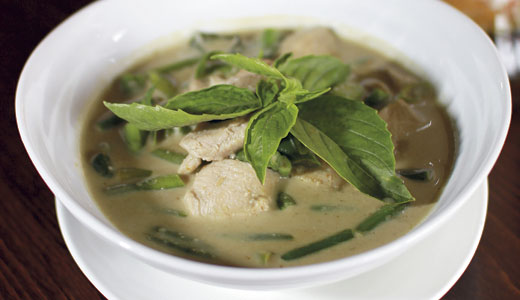 First your tongue and your lips burn. Then your eyes water. Your nose runs, and then you break out in a sweat. And you are loving it. Why do we humans enjoy tormenting ourselves with hot peppers? Because it hurts so good!

One-hundred years ago this year, the scientist Wilbur Scoville developed a method that put a number on the levels of spicy heat. The scale that now bears his name ranges from zero (for green bell peppers or pimentos, which have no detectable heat) to wacky peppers like the Bhut Jolokia (“ghost” pepper), which come in at more than 1 million Scoville units.

Experience builds endurance, so chile-heads who enjoy popping habaneros like potato chips may want to move up to ghost peppers, and then on to police pepper spray, which may hit 5 million Scoville units and is not legally available to civilians.

For good basic training on the Scoville scale, I recommend Louisville’s Simply Thai. Thai cuisine is one of my favorites, because its tropical flavors light up a meal, and fiery spice is its inspiration. Those who fear heat need not be afraid.

“We can adjust the spice to your desired level,” Simply Thai’s menu pledges, adding that it normally operates on a zero-to-five-point scale, but that customers are welcome to invent their own number, as high as you wish, perhaps up to the point where the infamous University of California cop John Pike will come in and personally give you a shot of pepper spray.

This St. Matthews area favorite opened six years ago in the tiny building that now houses NamNam Vietnamese. It quickly gained a name for outstanding, affordable Thai fare. Happy crowds soon overflowed the undersize venue, so early last year it moved into much larger quarters across the street (and later opened a Middletown branch). It’s still thriving — we nabbed one of the last tables open on a Wednesday night — and is doing even better with space to spread its wings.

Owner Mahn Saing, who is Burmese, and his Thai wife, Chaveewan Saing, a classically trained chef, have stuck with a menu that covers the Thai basics and, to throw a change-up pitch, adds a selection of well-made sushi.

A broad selection of Thai appetizers are mostly $5 and $6, with satay, the famous Thai chicken on a stick, topping the list at $7. More than two dozen main-course selections are categorized by type of dish: noodle or rice plates, Thai curries and entrées.

The noodle, rice and curry plates range in price from $8 to $14, depending in part on whether you choose chicken or vegetarian, beef or shrimp as your main ingredient. The Thai entrees are $12 (for chicken or vegetarian fried rice) to $22 for Amazing Seabass, a dish that I am sure lives up to its name. A couple dozen Japanese items — mostly sushi rolls or one-bite nigiri — are all under $10.

Our new pal Ernie, who was up from Ashland, Ky., for a visit to Louisville, said he had never tried Thai food. But he claimed to be able to drink Louisiana Hot Sauce straight from the bottle, so we figured Simply Thai would be a great place to introduce him to the glories of Thai.

After laying down a base of Falls City ($3.75), we shared appetizers. Nam Prik Ong ($6) is a lettuce wrap re-imagined as a salad. A warming, lightly spicy mix of pork — or tofu, if you prefer the meat-free option — was finely minced with onions, tomatoes and cucumber with maybe a couple hundred Scovilles of heat, served over a bed of cool, crisp iceberg lettuce and cilantro.

The shrimp “package” ($6) is a crispy crunchy fried treat, and who doesn’t like that? Shrimp was finely minced with garlic and cilantro and packed into a half-dozen little fried wonton purses with a small relish bowl of diced cucumber in a sweet syrup, a cool Thai antidote for fiery spice.

Four curry puffs ($5) were similar: chicken, potato and spices were minced into a soft filling for crisp-fried pastry turnovers.

Ernie tried a Thai classic, Pad Thai with beef ($9), and let the server talk him down from the level five (best for Thais, she said) to four (just right for adventurous Westerners). He was mighty pleased with this traditional stir-fry of beef slices with a textured mix of rice noodles and crisp bean sprouts garnished with chopped peanuts, hard-boiled egg and aromatic Thai flavors.

I went with level four for the Green Curry ($11), too, and was rewarded with heat that made my nose run a little and definitely got the endorphins working. Lots of green beans, coconut milk, tofu or chicken, and warm spice came together for a perfect Thai curry served with steaming white rice.

Mary combined a souo (Fish Tom Yum, $7) and a sushi option, the colorful eel and avocado Green Dragon Roll ($7.50), and called for spice level one in the soup; she said she was delighted with the just-enough-to-taste heat.

A fine dinner for three was $65.72 before tip. The share for two would have been about $45 plus tip.