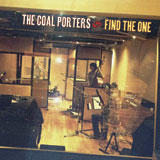 They call it “alternative bluegrass,” but all that is alt about their ’grass is that the Coal Porters don’t let the genre’s limitations hold them back from adding new flavors to their plate. Also, they’re based in London. Leader Sid Griffin was raised in the bluegrass state, in the Southern town named for King Louis XVI, and his ragtag group features three lead singers, members older and younger, American and British, male and otherwise, plus, a guest solo here from Richard Thompson; it’s that grab-bag approach that distinguishes the Coal Porters. The band celebrates Americans who play like Bill Monroe, the Scotch-Irish who originated a form of this music, and throws in crowd-pleasing versions of two modern British standards (Bowie’s “Heroes” and the Stones’ “Paint It, Black”), which sound pretty gosh darn good reconstituted as ballads and barn-burners.