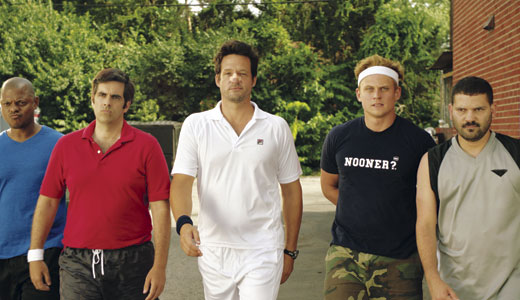 From Wimbledon to the Olympics to the U.S. Open, it’s been a balls-out year. Tennis balls, that is. With more than 30 million players nationwide (according to the United States Tennis Association), tennis is one of America’s most popular sports. And yet, while Will Ferrell and company churn out movies about pastimes from car racing to figure skating, no comedy has ever successfully tackled the white skirts and swishing rackets of competitive tennis.

Producer Gill Holland hopes to fill this void with his latest film, “2nd Serve,” opening Friday at Village 8. Written by James Markert and directed by Tim Kirkman, the film follows Owen “Game Set” Match (played by Josh Hopkins of “Cougar Town”), a tennis pro fired from his cushy job at the Fountain Club who is forced to take on the motley crew of washed-up players and pros at the decidedly less-than-posh Derby City Recreation Center. It’s a story of mid-life crises and forgotten dreams, all culminating in a showdown of epic proportions as the teams battle it out for fame, glory and the Combo Cup.

“There has never really been a successful tennis movie,” Holland says. “There are a few which feature tennis peripherally, but the couple I watched are so incredibly bad that I figured this was a good niche for a sports film. When I started laughing 20 minutes into reading the screenplay, I knew I had finally found a film I could shoot here in Louisville.”

The Derby City is showcased in nearly every aspect of the film, which Holland describes as a hometown project at heart. From the casting director to the crew, Holland chose people with a feel for the city and a personal stake in making a film Louisvillians could be proud of.

Local actress Leah Roberts, who plays the brutish and unibrowed Dina, describes her surprise at the level of professionalism found on the low-budget film. “I almost didn’t go to the audition because I thought, ‘Oh, a film in Louisville? That can’t be legit,’” she recalls. “But I’m thrilled I did. When I went to the first read-through, I saw all these people I’d watched in movies and TV my whole life, and I knew I had been wrong.”

After her experience making “2nd Serve,” Roberts says she hopes to see more films made locally. “Louisville is a perfect place for filming. We’ve got ritzy neighborhoods; we’ve got slums. We’ve got tall buildings; we’ve got rolling hills. We’ve got green summers and snowy winters. Even though this particular film is actually set in Louisville, I think one of our city’s greatest assets for filming is that it can look like Anywhere, USA.”

Jou Jou Papailler, another local actor in the film and a member of the Kentucky Film Commission, reiterates this goal of bringing more films to the bluegrass state. “My personal goal is to be able to make big Hollywood films here without Hollywood controlling their image of Kentuckians,” he says.

In addition to its largely Louisvillian cast, “2nd Serve” showcases several local landmarks, from Waterfront Park to parts of Butchertown and Clifton. Holland hopes the film will spark interest in Louisville and its cinematic potential. “I think folks have seen enough of L.A. and NYC in movies, so Louisville is refreshing to see on the big screen,” he says. “Our town plays a big part in the film, and I think folks will be happy.”

Roberts agrees. “I hope audiences leave laughing. And I hope they realize what a wealth of talent and creativity there is in our wonderful, weird city.”