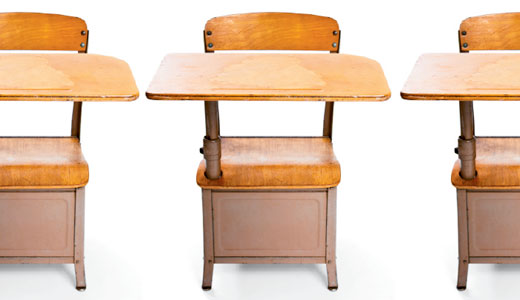 Every election season, media organizations dutifully devote word count or airtime to politics. Amidst this months-long swarm of candidate missteps and pledges, certain races tend to soak in a sad puddle of tepid interest: school board, judges, perhaps a council spot or two.

But this year, an unprecedented 14 candidates are vying for three of the seven JCPS school board seats, surmounting that down-ticket curse of modest attention.

Let’s run down a few of the headline-grabbing stories of late:

2) Also in District 7, former JCPS administrator and school board candidate Marty Bell was accused of soliciting district employees for support. A judge dismissed the case, but the teachers’ union, Jefferson County Teachers Association (JCTA), reportedly did not consider Bell for an endorsement. Tough break for a guy who once worked as JCTA’s executive director.

3) In District 2, David Jones Jr. has battled conflict-of-interest allegations after his opponent, Phil Haming, filed a complaint with the Kentucky Office of Education Accountability, citing Jones’ affiliation with Humana (JCPS’s insurance provider) and his venture capital business that invests in education products. Jones repudiates the notion he’s in this race for the money and promises to recuse himself from voting on any issue where a potential conflict of interest arises.

According to the Kentucky Registry of Election Finance, Better Schools Kentucky has raised more than $300,000. Meanwhile, the Bluegrass Fund’s coffers total close to $78,000.

Now living across the river in Indiana, Stephen Daeschner, former JCPS superintendent of 14 years, has watched the school board races’ twists. (He personally knows two of the candidates — Sexton and Bell — having worked with them in Jefferson and Clark counties.)

“I think that this race with three new board members … will be significant for Jefferson County,” he says. “I also believe that education is somewhat at a crossroads and not for student assignment plans, but mainly for the achievement of kids.”

He’s talking about the new tougher academic standards implemented in Kentucky known as Common Core. Gone are the days of rote, memory-based testing. Instead, year-end testing involves higher-order thinking where a student must not only choose the correct answer, but also show a mastery of reasoning behind it. That, Daeschner believes, is what new school board members must focus on.

But let’s be honest: No school board election could exclude discussion of JCPS’s student assignment plan. So where do candidates stand on this and other education issues? A brief collection of thoughts and statements from a few of the candidates follows.

This district includes parts of Newburg, Germantown and St. Matthews, as well as Crescent Hill and the Highlands. Former Board Chairman Stephen Imhoff is vacating the seat.

Elizabeth Berfield, a former librarian and mother of two young children, has said that she sees herself as “representative of a new generation of parents entering JCPS.” She supports the student assignment plan’s “core mission” of promoting diversity but also sees the need for strong local neighborhood options.

Phil Haming, a father of five with one child enrolled in JCPS and the rest in private schools, supports neighborhood schools 100 percent, saying if nothing else “we should limit the practice to middle and high school.” His plan for diversity? On WFPL he talked about “sister schools” that could organize field trips or other activities so that kids could “experience diversity without having to sit next to each other in school.”

David Jones Jr., JCTA’s endorsed candidate for this district, disagrees. During a WFPL debate, he stated: “It’s nice to talk about saving $38,000 on a bus, but if you’re talking about building a whole bunch of new $10 million elementary schools and $30-$40 million high schools, you’ve got to actually do the math.”

Jones says reverting to neighborhood schools would overcrowd certain pockets of the county.

Believing the switch to national common core standards will be a “cold shower” for the district, Jones says it’s something new board members must prioritize. He also feels classrooms could better utilize technology.

George “Stop the Bus” Tolhurst’s name says it all. In 1980, he actually changed his name to reflect his ideology. Short on specifics in debates, Tolhurst has lambasted the district as a whole with statements like, “Children can’t read, write or add.” He wants God back in schools, sex education out, and don’t you dare talk about raising taxes.

Melissa “Missy” Smith, a mother of two, works at Norton Health Care and places bullying as a top district issue.

Chester Flake, a father of three who worked for decades at Ford, expressed his thoughts on JCPS’s student assignment plan on WLKY: “Busing is reverse discrimination.”

Lloyd “Chip” White, whom JCTA endorses, attended Valley High School and is a father to five. Active in the carpenter’s union, White has expressed the need for more vocational training. He’s comfortable with the district’s new 13-cluster student assignment plan for elementary schools versus the previous six-cluster plan.

White told The Courier-Journal he does not feel a teacher should be evaluated and receive bonuses based on their students’ academic performance, citing too many external factors influencing a child’s testing abilities.

Eric Bullock, meanwhile, supports neighborhood schools. During a WFPL debate, he stated that a priority of his would be to match the best teachers with low-performing schools. He also desires smaller, more intimate class settings (a common goal shared by many candidates without a whole lot of specifics about how to get there.) Bullock graduated from Eastern High School.

Chuck Haddaway, a father to twins, has repeatedly expressed frustration at JCPS’s low graduation rate (67.8 percent for the whole district and only 62.7 percent for African-Americans.) He feels the student assignment plan needs more time to see if it works. Like Jones, he’s worried switching to neighborhood schools would overcrowd schools in eastern Jefferson County.

“A student’s ZIP code should not outline their possibility,” he said during a WFPL debate.

Marty Bell, a former JCPS and Greater Clark County Schools administrator, does not believe neighborhood schools are the “answer” for a struggling JCPS, saying there’s a lack of evidence showing it would improve student achievement.

He says he would’ve supported the board’s last tax hike. “The current funding formula at the state level … is designed to take money away from Jefferson County and spend it on other schools in the state because Jefferson County can raise their taxes and afford to pay … out of our local taxes,” he told WFPL.

Chris Brady, whom JCTA endorses, touts his experience as a substitute teacher and adjunct professor. He supports the current student assignment plan and says a web of factors affects student achievement, like the number of homeless kids — 10,000 — in JCPS. He’d like to see more wrap-around services for at-risk kids in schools. If elected, Brady also plans to work on recruiting successful administrators into persistently low-achieving schools. He also advocates for a stronger, more uniform bullying policy.

Christopher Fell’s claim to fame stems from his involvement in a lawsuit against JCPS due to his kindergartner being bused for hours a day, rather than attending a nearby school. Other than being an advocate for neighborhood schools, Fell, who’s studying criminal justice, said during a WFPL debate that “bullying is one of the biggest issues our kids face.” He supports incentives for teachers who teach at low-performing schools.

Jonathan Robertson, a graduate of Jeffersontown High School, believes charter schools could help improve achievement. Robertson also thinks parents should be allowed to send their student to a neighborhood school. When it comes to tax increases, Robertson says, “Enough is enough.” He’d also like to build electronic libraries, rather than stocking shelves with traditional books.

James Sexton, a former JCPS principal and current Greater Clark County Schools principal (see above), has frequently said that JCPS does not have good “holding power,” meaning both teachers and students flee the district for private schools. He believes in reviving vocational schools and career academies. A proponent of neighborhood schools, he called the current student assignment plan “confusing” during an appearance on WLKY. H