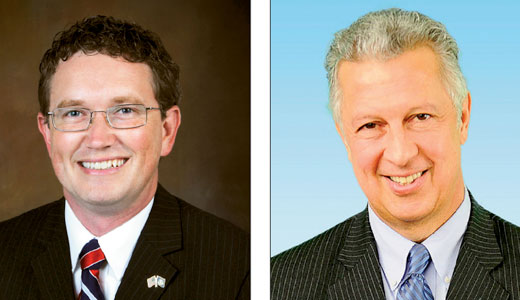 For over two decades, Sen. Mitch McConnell was the unchallenged Godfather of the Republican Party in Kentucky, imparting his blessings to handpicked underlings who helped him wrestle power away from the once-dominant rule of the state’s Democratic Party.

That all changed when Rand Paul and the Tea Party decided they would no longer need to kiss the ring of Lord McConnell, decisively knocking out Trey Grayson in the 2010 Senate primary and ushering in a new era for Bluegrass Republicans.

This new era of competitive leadership is reflected in the 4th District congressional race, where Tea Party Republican and political neophyte Thomas Massie trounced the old guard order of the party to win his primary.

Massie, not yet through his first term of his first elected office as Lewis County judge-executive, threw his hat into the ring once four-term Congressman Geoff Davis abruptly announced he would not seek re-election. Despite facing two strong establishment opponents — one of whom was endorsed by both Davis and eternally cranky former Sen. Jim Bunning — Massie cruised to an easy victory.

The “blessing” in Massie’s case was given by Rand Paul, along with his father, Ron, who helped steer support and donations toward the candidate whom they inspired to run in the first place. Meanwhile, McConnell sat on the sidelines in fear of getting burned again by these Tea Party upstarts.

While there are different breeds of Tea Party candidates, Massie is in the exact mold of the Paul family. Favoring an isolationist foreign policy, an exaggerated slashing of government spending and regulation, and protection of personal liberties from an intrusive government — except for women’s reproductive freedom, that is — Massie would give Kentuckians a “liberty” tag team in both chambers of Congress, carrying the torch of the soon-to-be retired Ron Paul of Texas.

Last year, Massie wrote a Facebook post decrying the fact that “RINO Romney” was likely to easily beat Ron Paul in the New Hampshire primaries because of the “socialists” that had infiltrated the state from Massachusetts. That’s a true believer.

Massie’s Democratic opponent, Bill Adkins, a lawyer from Williamstown, faces overwhelming odds against him. The already conservative 4th District grew even more so after redistricting this year, and Massie has continued to tap into the Paul donor network to build a giant advertisement advantage for his campaign.

But Adkins, a thoughtful, articulate advocate of liberal Democratic policies and a critic of Tea Party extremism, refused to let the Republicans go unchallenged — a common occurrence in Kentucky’s federal races — throwing his hat into the ring and landing a few blows toward the end of the campaign.

Hoping to run out the clock, Massie had avoided any debates or any appearances with Adkins in which a mistake could change the dynamics of the race, but he finally appeared on KET last week for their one and only debate.

Massie — now supporting government spending for much-needed bridge construction on the Ohio River — was caught off guard by Adkins when he revealed that Massie’s first business received start-up loans from (gasp) the federal government. After first denying the charges outright, Massie eventually conceded, then fired off a snippy response to The Courier-Journal’s Joe Gerth when asked about it after the debate.

Massie has said that with his district’s conservative makeup, he’s ready to go to Washington to shake things up Ron Paul rEVOLution style, and he’s “ready to be unpopular.”

We’ll believe that if Massie tells Northern Kentucky he doesn’t have a bridge to sell them. H