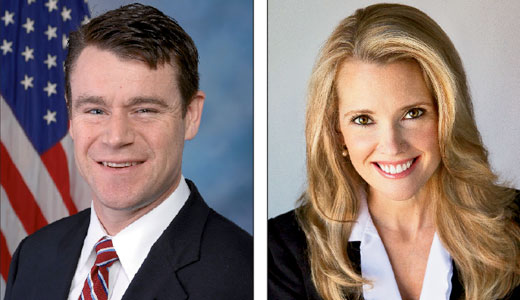 If the Democratic Party has any hope of taking back the majority from Republicans in the House of Representatives this election, Indiana’s 9th District — stretching from New Albany and Clarksville to the south Indianapolis suburbs — is the perfect encapsulation of the type of race they will have to win, or at least compete in.

In the historically Democratic district, Todd Young became only the second Republican since 1964 to win its seat in 2010, joining many Tea Party freshmen on the GOP wave into Washington.

Bloomington Democrat Shelli Yoder — a sharp nonprofit executive and former Miss Indiana — hopes that voters have a case of buyer’s remorse and choose to end the experiment of letting John Boehner and the Tea Party control the nation’s purse strings.

But like her party as a whole, Yoder faces a steep climb in order to defeat Rep. Young and make this happen. The Indiana legislature redistricted the 9th earlier this year to become more conservative, and Young has amassed a much larger war chest to blanket the airwaves with advertisements.

Nevertheless, Yoder has crisscrossed the district’s 13 counties with vigor, singing the praises of reform that Young and Republicans fought — such as the Affordable Care Act — and criticizing the deep budget cuts that Republicans have advanced.

The centerpiece of Yoder’s attack against Young focuses on his support of the budget plan of Republican vice presidential candidate and Congressman Paul Ryan, which would turn the Medicare program into a voucher system for future retirees.

This legislation would send the elderly into the private marketplace to haggle with insurance companies, and assuming Republicans are successful in repealing what they call “Obamacare,” this would be a market in which those private insurance companies could rightfully deny coverage based on an elderly patient’s pre-existing conditions.

Yoder also has come out in favor of repealing the Bush-era tax cuts for the highest income bracket, and she hasn’t been afraid to tackle the issue of reproductive rights. After Missouri Republican Senate candidate Todd Akin made his infamous “legitimate rape” remarks about abortion, Yoder was quick to highlight the fact that Young co-sponsored legislation with Akin that would have not just limited access to abortion, but redefined rape as “forcible rape.”

Indiana Republican Senate candidate Richard Mourdock’s bizarre comments that abortion should be outlawed even in cases of rape because “God intended that to happen” created a media firestorm that was impossible to avoid in the 9th District, which could further harm Republicans’ reputation with female voters.

But Yoder’s solid Democratic arguments present a challenge in the district, which is now trending more conservative with its increase in rural and suburban voters.

Most election prognosticators say that Young is a safe bet to win, and Democrats could still take back the majority in the House even if Yoder loses. But if the election returns on Tuesday show Yoder pulling off the upset, you can be sure Nancy Pelosi is going to get her old gavel out of the closet.