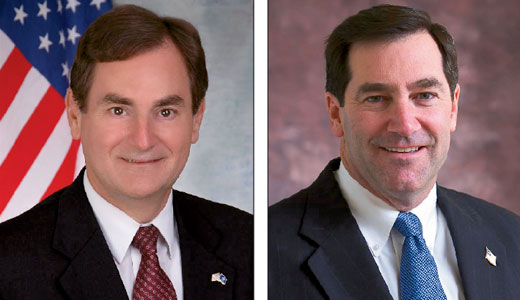 Oddly enough, Sen. Mitch McConnell’s dream of becoming Senate majority leader was dashed in 2010 by the same dynamic new force that was largely responsible for the Republican takeover of the House that year: those wacky Tea Party candidates.

The Republican primary victories of candidates like Christine “I am not a witch” O’Donnell and Sharon “Second Amendment remedies” Angle turned what should have been easy victories over Democrats into frustrating defeats, as Republicans fell a few seats shy of taking back the Senate.

Now, just across the river from McConnell’s hometown, history may repeat itself next week, thanks to Tea Party darling Richard Mourdock’s blowout defeat over 35-year incumbent Richard Lugar in this spring’s Republican Senate primary in Indiana.

With Mitt Romney now on pace to win Indiana easily over President Obama, Lugar likely would have been sailing to victory over centrist Blue Dog Democratic Congressman Joe Donnelly. However, Lugar committed the fatal sin of Republicans in the Tea Party age: He was only a very conservative, respectful statesman, instead of a fire-breathing warrior against Obama’s socialist destruction of everything good and decent about America.

Mourdock partly won the primary by running against the very notion of playing well with others, literally saying, “We need less bipartisanship in Congress.” Despite Lugar voting almost uniformly against Obama’s agenda, Mourdock mocked his “bromance” with the president, complete with a campaign video of the cartooned pair hugging and giggling over a rainbow (classy).

Even after his blowout victory, Mourdock continued attacking Lugar, writing in a fundraising email that he “routinely betrayed conservative voters.”

Thus started the battle over “Lugar Republicans,” between the moderate Donnelly and far-right Mourdock, which up until last week was looking like a remarkably even race.

That’s when Mourdock decided in a debate to share his now infamous belief that abortion should be illegal in cases of rape because such life was “a gift from God” that God “intended to happen.”

At a rushed press conference the next morning in response to the national media firestorm, Mourdock stood by his statement, simultaneously criticizing those who “twisted” his words and half-apologizing to those who “misinterpreted” them. Fellow Republicans were confused as well, with some distancing themselves from Mourdock, and others — like McConnell, needing this victory to take back the Senate — standing by his side as a partner in damage control.

In typical form, Romney — who cut an impeccably timed TV endorsement ad for Mourdock days earlier — took both sides, saying he disagreed with the comments but stood by his endorsement.

Mourdock later said he would gain votes from social conservatives due to the dust-up, despite Donnelly sharing (less extreme) anti-choice positions. He may very well be correct.

But just as likely, those Indiana moderate Republicans will yearn for the dignified aura of Lugar — who is conspicuously silent, refusing to campaign for Mourdock — and honor his memory with a bipartisan vote of their own. H