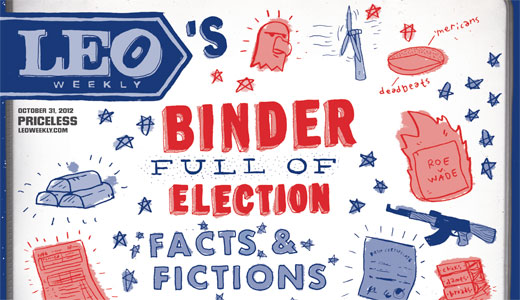 After eight years in Metro’s economic development office, Jacobs went to work for a real estate investment firm in 2011. As host of Metro TV’s “Leadership Landscape” show, he amicably chatted with Councilman Owen in 2008; now he wants to crush him. OK, not really … it’s actually been a rather tame face-off. On a random note, Jacobs wants to build a pedway over Baxter Avenue and resurrect a Bardstown Road streetcar called the King Louie. His campaign website makes a big deal about the fact that his FB page is updated twice daily. A fact-checking mission revealed that he a) is following through on that promise, b) has a cute baby, and c) is not afraid of being photographed with creepy clowns.

If ever you have a random question about this city’s past, just ask Owen. The historian and U of L professor is an encyclopedia of knowledge; in fact, he helped write the massive “Encyclopedia of Louisville.” The incumbent has held his Highlands council seat for a decade and previously served eight years on the Board of Alderman. A proponent of alternative transportation, the councilman can often be seen waiting for TARC or riding his bike to work. (It’s worth noting we recently spotted him peddling down the sidewalk along Bardstown Road, a no-no for those older than 11. Keep it on the street, Tom.)

An industrial maintenance technician from Valley Station, Rosenberger wants voters to “Take out the trash on Nov. 6,” according to a “Republican Revolution” photo on his Facebook page. He is pro all of the following: life, family, guns and growth. He is anti tax-hikes and big government. He does not believe in handouts. If elected, Rosenberger vows to exit Metro Council after one term (maybe two). He supports the prospect of banks taking ownership of houses they foreclose on, requiring them to pay fines when said house becomes blighted. Which is exactly what his opponent proposed via an ordinance just last week.

As previously mentioned, Blackwell recently garnered press for a proposed law aimed at forcing banks to maintain vacant foreclosed homes. (A nice idea, though it’s unclear how effective it would be.) Some misses during his council tenure (which began in 2003 and includes a stint as council president): spearheading the controversial “dangerous dog” ordinance, as well as a smoking ban with lots of loopholes. But he’s also had his share of hits, like securing $5 million in transportation funds to enhance lively Dixie Highway.

For the past two years, Fowler has served as legislative assistant for outgoing Councilman Bob Henderson, giving her a unique opportunity to learn the ropes. (Kind of like our interns, but with better pay and no coffee-fetching duties). Her campaign website indicates she’s in favor of public safety, better infrastructure and economic development. (Kind of obvious, but OK.) And though her platform lacks specifics, she’s received the endorsement of Rep. Joni Jenkins, whom we trust, so that’s something.

The realtor and proud Rotarian is past-president of a group dubbed Citizens for Better Government. And by better, they mean smaller. This is his second attempt at taking the District 14 seat, and he beat out four GOP contenders in the primary. According to his campaign website, he has no desire to be an “agent for government bans and restrictions on your personal freedom” and will focus on — wait for it — reducing government. Businessman Chris Thienamen vouches for the Republican, as does South End barber James Phillips, who says, “I’ve cut Bob’s hair for many years. I know Bob and I can tell you, he cares about this community.” Also, Bob’s bald.

Downward has served on the council for a decade, much of which was spent tormenting ex-Mayor Abramson. The CPA has proven to be a borderline rabid watchdog, particularly when it comes to righting mismanaged city agencies, like Metro Animal Services and MSD. He’s also been a harsh critic of the Fourth Street Live mastermind the Cordish Cos. and certain city leaders with a penchant for throwing money at the Baltimore-based developer. In 2006, Downard ran for mayor but was unable to take down his nemesis. Recently, the public servant suffered a lapse in judgment when endorsing Marilyn Parker (more on her later) to replace GOP council colleague Jon Ackerson, whom fellow Republicans criticized for his bipartisanship.

This retired Army lieutenant colonel and attorney already serves on council … the Northfield City Council. (Fact: Northfield is a tiny city within Louisville, population 940.) If he makes it to the big league, Martin would strive to impose council term limits, increase the tax base through business development, and eliminate neighborhood discretionary funds, which he believes are subject to misuse. On his website, he states, “It is my opinion that there exist certain corruption in our government and its agencies. Without going into my suspicions, if elected I will seek to determine the existence of such corruption and if found to exist, I pledge to use my best efforts to combat such corruption.” Sounds like Agent Fox Mulder. We dig.

A hysterical Tea Party activist, Parker believes Obama is a secret Marxist Muslim who was not born in America. Last year, she circulated an “article” linking the Obama administration to the shooting massacre in Tuscon, Ariz. When not touting conspiracies and rambling about “socialists,” Parker busies herself with biblical history and Austrian economics. She might also have the ability to brainwash, as evidenced by the fact that six council Republicans endorsed her over Councilman Ackerson, who lost in the primary.

The 33-year-old entrepreneur operates a DJ service, co-owns a marketing firm, and is assistant manager for membership at Oxmoor Country Club. When he’s not working or chasing his toddler, Ridge spends time developing smartphone apps. If elected, he would take steps to make city government more tech-savvy, as well as seek consensus from both parties to solve problems. And though his favorite restaurant is The Cheesecake Factory, don’t hold that against him on Election Day.

On his campaign website, Benson states, “I am the sum of every person I have ever met.” Deep — we like it. A retired teacher of machine tool technology at Southern High School, he was first elected in 2002; politically, he’s been pretty tame compared to many of his histrionic council counterparts, passing some worthwhile measures while staying out of the mud. Much of his focus has been on transportation improvements for his traffic-jammy district. And we give him props for not endorsing Marilyn “McCarthy-in-Heels” Parker. Finally, he’s one of a bazillion members of Southeast Christian, which is located in his district.

Though a first-time candidate, this attorney has an impressive résumé, starting with his current role as an adviser to foreign governments in countering the financing of terrorism, which sounds super important. Previously, he was the director of criminal fraud investigations for the state Department of Insurance and an assistant AG in the regulation of financial services. Not surprisingly, police and other union folks give him the thumbs up. According to Cohen, “I am running as a Democrat, but keeping our district as a nice place to live belongs to all of us and not a party.” He’s also a member of Southeast Christian, so consider it a level playing field in that respect (if that’s the kind of thing you care about).

As chairman of the appropriations committee, Engel has pushed for greater accountability on Metro Council. Last summer, he asked the Ethics Commission to determine whether it’s appropriate for council members to shower constituents with gifts. And when he and five other Republicans endorsed Marilyn Parker, his reason was the fact that Ackerson had joined Democrats in opposing an ethics ordinance. On his website, he quotes Thomas Jefferson, saying, “He who permits himself to tell a lie once finds it much easier to do it a second and a third time, till at length it becomes habitual.” Outside Metro Hall, Engel works in sales and has four kids (whom I’m guessing know better than to lie).

Robert Zoeller admits he took a 16-year hiatus from voting because he became disenchanted with politics. But now the 52-year-old is back, this time as a candidate, something he chose to do because he “grew tired of listening to career politicians constantly asking for ‘MO MONEY, MO MONEY, MO MONEY.’” Zoeller has worked at a local sheet metal plant for 32 years, and according to his website, he does most of his shopping at Walmart, opposes tax increases, and loves guns. (And yes, you read that capital “D” by his name correctly.)

Several months ago, this councilman made news by calling on the Government Accountability Committee to investigate the fiscal shenanigans of colleague Barbara Shanklin, saying, “I do not believe that our role as an elected body should be passive in this instance where public trust and transparency are at risk.” The attorney also pushed for mayoral term limits to be reduced from three to two, but to no avail. His dad is outgoing Republican Jon Ackerson. Avenge thy father’s ouster!

Provancher has proven to be a polished candidate, likely due to her work as a public relations professional. She wants to improve communication between residents and police, grow small businesses in her district, retain big businesses in the city, and launch a monthly newsletter. John Schnatter hosted a fundraiser for the candidate, and her Facebook page includes a picture of the pizza mogul being kind of a creeper. Easy does it there, Papa…