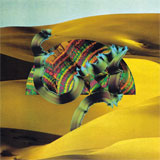 Life was getting boring. All sandwiches started tasting the same. All dance music started to sound like David Guetta. The drive to work was monotonous, one traffic light after the next changing to red in unison. Then came Django Django, a four-piece band from London by way of Edinburgh. They took all that boring, shook it up and down like a bag of sonic confetti, and poured it into our ears. “Default,” one of the singles, is a beautiful mess of seemingly clashing parts: ping-pong basslines, effortless harmonies, synthesizer swirlies, and beats so infectious it hurts. The rest of the album is just as puzzling and addictive. From the Arabian nights-synthesizers of “Skies Over Cairo” to the ready-for-the-rodeo guitar twirls of “WOR” to the power pop mastery of “Hail Bop,” Django Django is bringing back life in Technicolor.