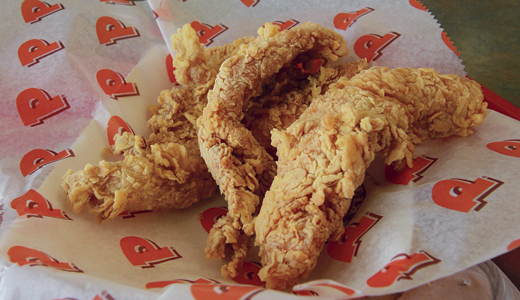 It’s a journalist’s job to tell the truth, which can sometimes mean hours spent scouring complex documents, asking tough questions, or relaying an unpopular message that sparks a flurry of hate mail. And sometimes it means taking risks, as was the case in our endeavor to resolve this crucial culinary query: Where can one find the best chicken tenders in town?

A team of five dedicated journos braved the potential for intestinal upset and a spike in cholesterol to bring you the skinny on this flavorful, fried and oh-so-fatty finger food. We picked six restaurants ranging from a locally owned mom-and-pop shop to the world’s second-largest restaurant chain. In the end, we were uncomfortably full, swearing off fried food for the foreseeable future and fighting over the lone office couch for a post-feast snooze. We also were surprised by the results, which are presented below, beginning with the clear-cut winner.

1. Popeyes Louisiana Kitchen
Four out of five taste-testers agree this chicken is champ. That said, you might have to drive a good distance to feast on this first-place fowl, as Louisville boasts only three Popeyes — Bashford Manor, Preston Highway and PRP. Launched in New Orleans in 1972, Popeyes has since grown into a chain of more than 1,800 restaurants while developing a rather cult-like following. Yep, the chicken’s that good. And here’s a bit of trivia: The restaurant was named after detective Jimmy “Popeye” Doyle from “The French Connection,” not the brawny sailorman. As for that missing apostrophe in the name, it was a mistake in the beginning, but the owner later joked he was too poor to afford the extra ink. And how about the chicken?

Appearance: A light golden hue with lots of texture.

Crust: Whoa, that’s crunchy! And not greasy. (We’re sure the grease is in there, it just doesn’t end up on your hands — neat!). There’s a spicy kick to the batter.

Comments: “If fast-food fried chicken is wrong, I don’t wanna be right.” • “Suck it, Colonel.”

2. Chick-fil-A
If only the Bible-beating chief operating officer of this restaurant chain would keep his bigoted views to himself, we could enjoy this divine chicken in good conscience. Unfortunately, he won’t shut up about the evils of gay marriage, sparking a firestorm of controversy that prompted right-wing Christians to gorge on fried food in the name of the Lord while gays and lesbians protested via public displays of affection. And though we really, really wanted to hate this chicken, it’s goddamn good.

Crust: Light yet crunchy batter is perfectly seasoned with a touch of sweetness — just like we remember it from those days when ignorance was bliss.

3. KFC
When you’re the world’s largest fried chicken chain, quantity obviously trumps quality. Which is why this one surprised us: These tenders are downright tasty. Colonel Sanders would be proud. Oh, wait … no he wouldn’t: Before his death, the colonel from Corbin, Ky., proclaimed, “They prostituted every goddamn thing I had.” There’s also the fact that KFC has become PETA’s public enemy No. 1, which would typically make us think twice about patronizing the chain. But we did it just this once, in the name of journalism.

Crust: The secret 11 herbs and spices are subtle (borderline bland), but the breading is crisp.

Chicken: It’s juicy. And it appears to be real chicken. Again, expectations exceeded.

Comments: “A bit mild, but nothing a side of gravy can’t fix.” • “Makes me want to lick my phalanges.”

4. Lee’s Famous Recipe Chicken
Reactions are mixed when it comes to this chicken joint, founded by Lee Cummings, the nephew of Harland Sanders himself. After spending years frying alongside his uncle, Lee set out to develop his own recipe in 1966. There are now about 140 Lee’s in a dozen states, including four in Metro Louisville. The consensus: These tenders are good, not great.

Appearance: Thick pieces of chicken fried to a medium golden brown. So far, so good.

Crust: Despite a lot of grease, the breading retained its crunch. No real spice, but heavy on the salt.

Chicken: Large chunks of quality — albeit rather dry — chicken. The grease factor helps keep it juicy.

Comments: “Water me, stat.” • “These are some hefty breasts.” • “Big breasts aren’t everything.”

5. Indi’s Fast Food
We’re sad to report the two local chicken shops we visited rank at the bottom in our tenders taste-test. But of the two, Indi’s wins by a longshot. The ambiance of this chicken and soul food restaurant far exceeds that of its corporate competitors in this experiment, and it offers an array of delectable dishes: from the far superior bone-in chicken and fried fish sandwich to collard greens and sweet potatoes. That said, don’t steer clear of Indi’s — just consider branching out beyond chicken strips.

Chicken: Heavily processed meat resembles fast-food nuggets and tastes as though it could have been microwaved (though it was most definitely fried to order). And these sad little cutlets are rather puny.

Comments: “Takes me back to my middle-school cafeteria.” • “Looks like particle board.” • “This would be good after a long night of drinking.”

6. Chicken King
OK, so there’s nothing redeeming about this joint’s chicken tenders, which resemble those served at Indi’s but taste like bad tofu. However, we’ve heard rave reviews about this East Broadway hole-in-the-wall’s other menu items, including the bone-in fried chicken, hot wings and down-home sides and desserts, including homemade banana pudding. Apparently, the chicken strips are intended for kids … so now we know.

Crust: Same dusty coating as the place above, minus the peppery kick.

Chicken: The pre-formed, processed meat is dry. And it does not taste good. In fact, the taste-testers let out a collective groan after the first bite.