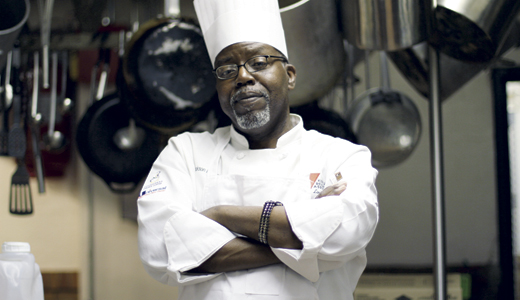 If you’ve noticed the grub around here steadily improving over the past several years, Sullivan University’s Culinary Arts Program is one of the reasons why. Having cracked the Top 5 on multiple “best in the nation” lists, the university’s National Center for Hospitality is now attracting bright, young kitchen talent from not just the commonwealth but all over the world. With Kentucky’s excellent agriculture and growing share of the national culinary spotlight, some are hanging around to contribute to our emerging restaurant scene after graduation.

Akmon started out as a 15-year-old dishwasher before moving on to chef posts around the globe. The instructor of International Cuisine says the food scene here compares favorably with other cities he’s lived in, and he believes Sullivan has a lot to do with that. Akmon points to the effect the school’s Lexington campus — which opened during his tenure — has had on that city.

“When we started out there, there were two or three nice restaurants. Now, less than 10 years later, there’s a boatload of really great places, and I think that’s directly attributed to the students coming out of there. A heightened appreciation for good food has come along with that, too,” Akmon says.

But with tuition in the $40,000 range for the 18-month associate degree program, there’s more than a handful of Louisville chefs who have opted instead for on-the-job training, working their way up the chain of command as prep or line cooks.

Jason Scot Pierce, one of the men behind the WAVE-3 show “Secrets of Louisville Chefs,” agrees that Sullivan has made a major contribution to Louisville’s cuisine. Pierce, a student at the university in the early ’90s, started working in kitchens during Bardstown Road’s original fine-dining wave. (Coincidentally, he took his first dishwashing gig at age 15, like Akmon.) Throughout the ’80s, Pierce worked in kitchens like Lentini’s Little Italy and Uptown Café. He recalls Bardstown Road Tomorrow, a community organization whose focus was growing Louisville’s “Restaurant Row.” By chance or design, the inception of Sullivan’s Culinary Program in 1987 coincided with these efforts.

“It couldn’t have been a better blessing for Kentucky that Sullivan set up shop when they did, like they did,” Pierce says.

Asked to weigh in on the question of culinary degree vs. entry-level restaurant job, Pierce says this quandary is near to his heart and is something parents of graduating high school students ask him about all the time. His advice: As much as he recommends culinary school, one should work in a kitchen first. Give it six months, even a year, learn the stations, figure out if this is how you want to spend the rest of your life before taking on a big loan.

“You get these kids, 4.0, straight-A students. They see chefs on TV, see the glamorous side of being a chef, but don’t see the dedication and long hours. And coming out of culinary school, if you don’t have any practical experience running a crew, it can eat you alive. It really can. I have seen people come out with their degrees, then go backward, because they just didn’t have that skill,” Pierce says.

Chef Timothy Tucker compares this to buying a $400 trombone before figuring out whether your kid likes band class. He adds, “The days of thinking you can graduate from school and work in the best restaurants as the chef are over. There are too many talented people.”

Tucker, a recipient of Sullivan’s Distinguished Alumni and Community Service awards in 2007, says he has been served well, blending his world-class education with the minimum-wage restaurant work he took while on his way up. He believes his degree will always get him a foot in the door, and the extra education picked up while working under talented people in several upscale restaurants further separates him from the pack.

Tucker also suggests Sullivan’s growing reach, both in Kentucky and across the country, is another asset that may make the tuition a sound investment. His current boss is John Richards, director of the Miami Culinary Institute. Richards is a fellow Sullivan alum and familiar with the legacy that Tucker left behind in Louisville, namely, the Salvation Army Culinary Training Program, which has taught scores of homeless and disadvantaged individuals the skills needed for kitchen careers. Today, Sullivan University is a key supporter of that program, and Richards has recruited Tucker to launch something similar in Miami.

“I’ve received way more from that kind of work than I’ve ever put in. It makes it easy to sleep,” Tucker says about teaching. “I’m done with doing things that aren’t meaningful.”

Jackson Hodges, a current Sullivan University student, might be the most inspiring story to come out of Tucker’s program at the Salvation Army’s Center of Hope. Chef Hodges applied for Tucker’s class after past student loan complications prevented him from entering Sullivan. Hodges managed to turn his life around while at the Center of Hope, in the end earning a full ride to Sullivan and taking over for his instructor when Tucker moved on.

Asked how he felt about his student replacing him as teacher, Tucker says, “It’s always been my dream. That’s how I wanted to leave the program.”

For Hodges, there’s no mistaking the importance he places on a culinary arts degree, echoing what his mentor, Tucker, said about Sullivan’s influence in the restaurant world. “It opens a whole lot of doors. I actually got offered a job while riding on the bus the other day — a chef from one of the country clubs. We were on the TARC talking, and I told him about Sullivan. He gave me a card and told me to call once I graduated,” Hodges reports. “Sullivan has so many connections, even beyond Kentucky. I can go work in Las Vegas or on a cruise ship. With that associate degree, I can go pretty much anywhere.”

So, what makes one culinary program better than the next? For chef Akmon, it’s Sullivan’s quality of instructors that has pushed his department up the ratings chart. While Akmon concedes that the earn-while-you-learn approach to restaurant work is a viable option for some, he adds, “Like in any other profession, you can learn how in the industry. I think you learn why in school. If you only learn how, you may never really have enough pieces to put the full puzzle together.”