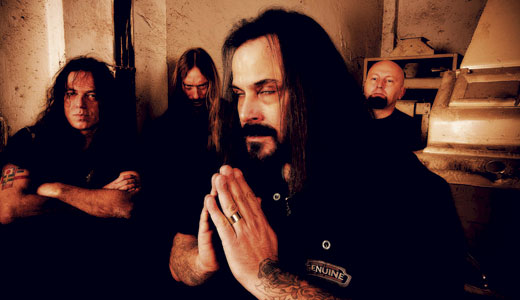 Rock ’n’ roll wouldn’t be the same if The Beatles hadn’t crossed the pond. You can’t have punk without The Sex Pistols. And after 23 years and 10 studio albums, it is clear that death metal can’t be defined without a mention of Deicide.

Having been a band for more than two decades, it isn’t surprising Deicide has switched out a few members over the years, but forever at the forefront of this controversially anti-Christian crew is vocalist Glen Benton and drummer Steve Asheim.

In 2011, Deicide released their most boldly titled album to date, To Hell With God. But how the band felt about Christianity was no mystery before, as they have often had to deal with protestors and even the occasional arrest threat.

“Over the years, we’ve had Christian protesters outside of shows. Like, if recently there had been a school shooting or a similarly tragic incident in that town, people will show up outside the show and protest, but they are basically harmless,” Asheim says of the band’s U.S. tour dates. “But overseas, one time for example, there was a priest that got shot by some kind of black-metal guy, and we were about to go play in that town that month. Then the radio promoter put out a really tasteless poster for the show of a priest with a bullet hole in his head, and the city lost it. The mayor threatened to arrest us if we played the show. Needless to say, we didn’t play that show.”

Incidents like this haven’t caused the band to back down. And Asheim’s personal stance isn’t necessarily as intense as Deicide’s music may make it out to be.

“It is the disillusionment that religion causes that bothers me, and so vocalizing my opinion is about exposing hypocrisies,” Asheim clarifies. “I’m not about all-out hatred, but I like to expose hypocrisy for the betterment of people. We keep the message angry and brutal just for shock’s sake. And Glen, especially, is good at that. Every couple of years, we kind of go through phases with how brutal and ‘in your face’ we want to be, when it comes to being hateful and vengeful and satanic and all that. Sometimes you want to be more clever with the wording, but sometimes you’ve just got to let it all out. We definitely let it all out (on To Hell With God).”

Asheim heads up the music writing process for the band’s albums, but no matter which direction the band decides to go, vocalist Benton is always the final decision maker. Asheim says that on their upcoming record, potentially due out in the summer of 2013, Benton has pulled in Asheim’s creative reigns a bit.

“Lately I’ve been liking super-crazy-fast stuff, and so I happened to be writing a lot of that lately,” he says. “But (Glen) would say, ‘Dude, there is way too much blasting and stuff in this!’ So I had to readjust my writing. It’s now more similar to our older stuff, like old-school death metal.”

The band has been writing new material for the last few months, so when they return from their upcoming tour, they will begin to record it. Asheim has even considered bringing back the classical piano influences he has used on past records to serve as a foil to their heavy death metal sound. “I did a piano piece most recently on (2004’s) Scars of the Crucifix as a hidden track, and I don’t know if I’m doing something on this one, but I may try to incorporate something like that in there. We’ll see how much time we have with the material, and if we need something, I may throw something in there.”

Don’t get your hopes up about hearing new songs Saturday night at Headliners. “It’s not quite in that stage where it is ready to be played live,” Asheim says. “We have the riffs and structure, but there are no leads or vocals or anything like that yet. But it will be 10 to 12 songs; we may do a cover song, like an old classic song, and make it metal. As always, it’ll be your standard Deicide fare.”

Deicide with Abominant, On Coke With Thor, Radiation Sickness, Ophiuchus