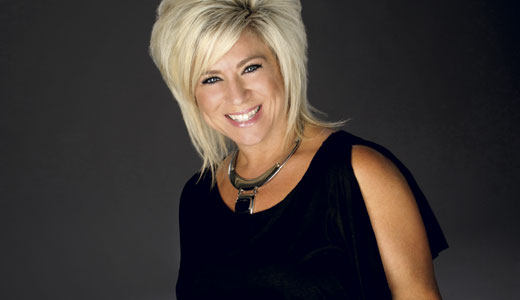 I admit I was skeptical when a friend suggested I tune into TLC’s “Long Island Medium” last month. “She’s coming here! We’re going!” she barked at me. Fine. Looks like I had some catching up to do and beliefs to suspend. I expected ghosts and a crazy lady who talks to them, but what I found was a comical show about a middle-class family from Long Island who go about their day just as we all do — the mom wishing for more closet space for shoes, the teenage daughter excited to leave for college, the college-graduated son who returns home to live, and the husband who rolls his eyes about all of it. It just so happens that the mom talks to the dead for a living.

Theresa Caputo has been working as a medium for more than 10 years, and the TV show that follows her life in and outside of readings is now in its third year. She says she wanted to take her talents on the road to inspire and touch more people. “It’s just really about connecting with my fans — allowing them to have the experience.” I caught up with Caputo and prayed one of my grandparents would not crash the interview.

LEO: Why do you think your show has caught on like it has?
Theresa Caputo: I’m still in denial that I even have a television show! I just think it’s something that was needed. I think timing is everything. It’s just amazing how many people you come in contact with just from the live show. I’ve always felt that it gives people hope and restores people’s faith.

LEO: You certainly have your fair share of critics.
TC: You know what, that’s the other thing. People can find negative things to say about the Pope, for god’s sake! So no matter what we do in life, people are not going to believe, or there’s going to be negativity. The response to and the welcoming of what I do so far outweighs the negativity.

LEO: Do you ever wish you could turn off your psychic abilities?
TC: I’ve learned how to live with Spirit. We’ve found that “happy medium,” so to speak, Spirit and I.

LEO: Do you communicate with spirits from your own family?
TC: Yes, I do. That’s hard, though. It’s easier for me to communicate with somebody else’s loved ones because, besides the emotional factor of it, when they give me things, I say to myself, “Did I know that?” When I’m giving information to someone, it might not mean anything to me but everything to someone else.

LEO: What’s been your biggest splurge since having the show?
TC: I don’t really know. Who has time? Before “Long Island Medium,” I was booked for two years already with clients. I’m still trying the very best I can to honor those appointments. So any free day I have off, I’m meeting my clients. And now I’m going to be going on the road. But, I am a girl who loves her shoes!

LEO: Growing up, did you ever think you’d be doing this for a living?
TC: Oh god, no! Absolutely not. I thought I was just going to be a housewife. Come on, Sara, I just have to ask you this. Who would ever think that they would have a career where they’re speaking to dead people for a living? I always thought I wanted to be on stage as a singer or a performer. I’m on stage now, it’s just a different type of stage. Because lord knows I can’t sing! I never thought in a million years that “Long Island Medium” was going to be this big! Remember the movie with the plant? “Little Shops of Horror”? With the plant — feed me. I’m like, that’s “Long Island Medium,” it’s out of control. Like, overnight it’s this huge thing, and I’m just blessed that I’m able to share my gift with so many people. Little kids will come up to me after the show and say, “I’m not afraid to die.” It’s all divinely guided.

LEO: What about the recent “SNL” parody they did of you — did you see it?
TC: Oh, I thought it was awesome! My only complaint is they didn’t get my hair high enough! I mean, look, I take what I do extremely serious. I feel like I’ve been given a very tall order from God. But I think that’s what makes what I do so popular, because I’m able to deliver it in a lighthearted way. And the “SNL” skit clearly depicts that. They did it with such class. Now everybody calls my husband the “Long Island James Bond”! It was hysterical! I felt it was a true honor.