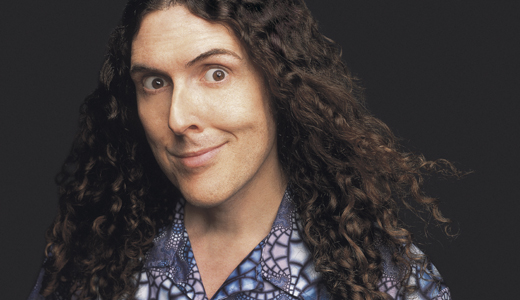 What can be said about Weird Al Yankovic? If you don’t know by now, you’re probably a child and/or a terrorist. So, because there’s only so much room here, and we don’t get many chances to chat with the musical satire star and subject of the new book “Weird Al: The Book,” here are some highlights from LEO’s interview.

LEO: Do you ever think about your legacy when you’re in the shower or clipping your toenails?
Weird Al Yankovic: (laughs) You know, putting together my coffee table book, I gave it a whole lot of thought. It was kind of a daunting experience to look over your entire life and try to make sense of it all.

LEO: Did you make sense of it?
WAY: It’s an ongoing process.

LEO: Putting together a retrospective package, did it feel like “How much more do I have left to give?” or “I’m halfway there”?
WAY: All of the above. I’m not quite done yet. I still enjoy what I do, and people seem to have not gotten completely sick of me yet, so I’d like to continue with my career. But it has been three decades worth of stuff, and there’s a lot of stuff that’s gone down, and once you look at everything, in its entirety, it’s pretty overwhelming. For me, at least.

LEO: You’ve lasted this long without any serious competition and survived huge changes in the music industry, and MTV, so you seem to be here to stay.
WAY: I guess there’s nobody that’s doing it, specifically what I do, at the level I’m doing it at, but there’s 100,000 people on YouTube doing song parodies. The market is a little more crowded these days. But I keep on and hope that people will still appreciate what I do. I’m perhaps not as unique as I was in the ’80s and ’90s.

LEO: That may be true, but who else can fill up a 3,000-seat theater, charge $25 or whatever, and people will be happy to be there?
WAY: (laughs) That’s probably true.

LEO: The book — how big is it? What kind of stuff is in it? Were the literati clamoring for the Weird Al book?
WAY: Well, I don’t know about the entire literati, but Abrams Books thought it was a good idea. I was happy to be involved with it, but I didn’t really feel like writing an autobiography. It didn’t seem like a pleasant job. Also, it didn’t feel right for me; it’s not like I was trying to get my story out there. It seems like I’ve been talking about myself nonstop for 30 years. I don’t think there’s anything I haven’t said about myself in various interviews and podcasts over the years.

I felt like for a fresh perspective, I should have somebody else tell the story. So I had them hire Nathan Rabin, who’s the head writer of The Onion’s A/V Club. He did all the heavy lifting of going through the details of my life and trying to make it interesting, have it make sense.

LEO: Did he go back to Lynnwood and talk to old teachers and old girlfriends?
WAY: I don’t think he talked to old teachers, but he talked to various people in my life: the band, Dr. Demento, managers — the people who have had an effect on me. Then he put it all together.

LEO: What can you tell people who haven’t seen your live show about why they should come out?
WAY: It’s a high-energy, rock and comedy multimedia extravaganza. I’m on the stage with the same band I’ve had since the beginning of recorded history, and we’re playing a lot of stuff from the Alpocalypse album, all the greatest hits and a few surprises here and there, costume changes, film clips … it’s never a dull moment onstage.

LEO: What’s the worst thing about your show?
WAY: When’s it over, there’s an overwhelming feeling of depression among the crowd (laughs).

LEO: Is there anything you haven’t done that you’d like to do?
WAY: I’ve been thinking possibly about writing a musical, but I don’t know.

LEO: Can you tell me one thing about yourself that you’ve never told anyone before?
WAY: Uhh, I am currently wearing plaid underwear.