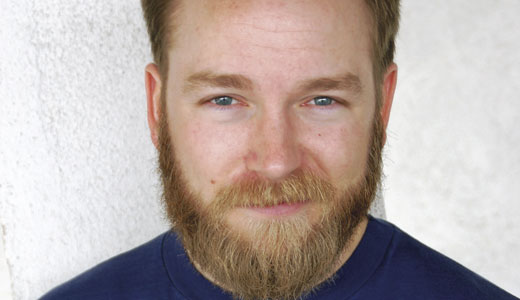 After releasing his debut album, Death of the Party, Kyle Kinane was voted one of Variety’s “10 Comics to Watch.” He has since appeared on numerous TV shows and podcasts (including “Conan” and “WTF with Marc Maron”), and had his own Comedy Central half-hour special. Kinane will do a special one-night-only performance on Sunday at The Bard’s Town. He spoke with us from his Colorado hotel room.

LEO: How is Colorado?
Kyle Kinane: A little chilly, but that’s all right — in the mountains, it’s supposed to be. It’s already fall.

LEO: Living in California, I assume you forget all of the seasons.
KK: I’ve traveled so much this year, I know nothing. I was talking to a friend the other day and said, “You know, probably around August I’m gonna take some time off.” Then I realized it’s October … there’s no more August … summer’s gone. It’s so nonstop, there’s no progression of seasons. It’s like this day runs into this day, and I’ll just figure it out.

LEO: Have you been through Louisville before?
KK: I have — I played Skull Alley on the first tour I did. And, actually, one of the first road gigs I ever had was at the Comedy Caravan, probably in 2002. But that Skull Alley show was great. I was bummed to see it wasn’t there anymore … but it’s awesome The Bard’s Town came through. Rory Skovel told me it was a great room.

LEO: So, do you remember the first joke you wrote?
KK: I had something about running a summer camp for kids with attention deficit disorder, and the punchline was, “It’s a ‘concentration camp’” … real classy. There were a lot of puns in those days.

LEO: How did coming up in Chicago affect your brand of comedy?
KK: I wasn’t really a Second City guy. So only in that the guys I came up with — Pete Holmes, Matt Braunger and all those people — were so goddamned good. I couldn’t just come to an open mic and screw around; I had to always write and always have new shit.

LEO: How is it different doing comedy in Los Angeles from doing it in Chicago?
KK: I probably moved there way too early and didn’t know anybody. But people are there specifically to make it — it was no longer like, “Oh, we just stumbled onto this fun hobby we all like to do.” Chicago was more like a bowling league, where I could just go out and drink with my friends a few nights a week. It just so happens they were all pretty good at this bowling thing.

LEO: Your blog is called “Shooting For Third.” Where does that come from?
KK: I always like to undermine any kind of ambition in my life. I’m happy with the bronze. I’m just excited to be invited, that’s all. I’m happy to be brought to the dance, I don’t need to be prom king.