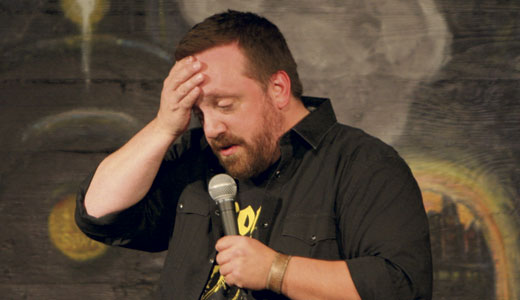 Along with friends Rory Scovel and Kyle Kinane, Derek Sheen is helping to spearhead the latest movement in alt-comedy. Like Patton Oswalt and Doug Stanhope before them, they are driving comedy shows out of the clubs and into some less obvious but equally appropriate venues. This Friday, Sheen will bring his astute observations and plethora of insecurities to The Bard’s Town.

LEO: When you decided to come back to Louisville, did you have any spots in particular you wanted to hit?
Derek Sheen: The Bard’s Town is my first choice, I love that place. And then, well, Kentucky being the home of bourbon, at some point I’m going to end up, like, “What have I done?”

LEO: Can you handle our 4 a.m. last call here?
DS: Yeah, I just got my bloodwork back, everything’s good. They said I’m 10 years away from diabetes, let’s see if I can match that. Liver’s solid, we’re good.

LEO: Being from Seattle, did being funny help you through the rainy season?
DS: It’s definitely a defense mechanism and an armor against all of the feelings that most people would normally have. It’s definitely something I’ve used as a weapon. When it’s dark and dreary for seven months of the year, you have to keep yourself entertained.

LEO: A lot of your humor is based on your deep-rooted insecurities. Where do they come from?
DS: You know, I have a weird mechanism for recording what I think. Sort of inventorying my experiences with people and keeping it in a file folder in my brain.

LEO: With the election coming up, as a comedian, who would you be able to get more material from?
DS: I think they both can be funny equally. I love our president, but there are so many faults that guy has — like, I hate being talked to like I’m a child. When he tells me that I just don’t get it, it makes me feel so dumb. And I hate that.

And Romney’s not a bad guy, he’s just surrounded by a group of the most mean-spirited weirdos in Republican history. They used to be a party of responsibility; now they’re just a party of old white men that are these weird trolls who, every day, look to say something evil. They need reinvention.

These guys are saying crazy shit, like, “I think all third-world babies should be shot out of a cannon.” Or, “The vagina is a tunnel that you’re supposed to drive hate into.” And then, every day, Romney has to go on TV, with his head in his hands, and say, “I don’t believe the vagina is a hate tunnel.”