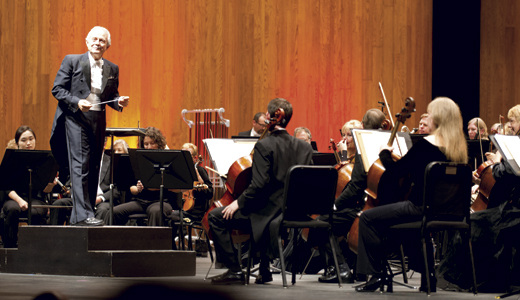 After a big number, you’ll always catch a couple musicians sneaking a look out at the audience, checking the reaction. But last Friday night at the Brown Theatre, it wasn’t just a few Louisville Orchestra players sneaking a peek, but most of them — as anxious for approval from their audience as the audience seemed to be in learning how their reincarnated symphony would sound.

The Louisville Orchestra — away from the stage for a year in a protracted contract dispute that eventually reduced the symphony from 70 full-time players to 55 — threw a mostly pop music “Fanfara” in September, with singers and show tunes and microphones. But this was the first classical music concert. The first big test.

And they picked the right spot for it. While the orchestra is based in vast Whitney Hall at the Kentucky Center — where they will return for concerts Thursday and Friday — this first look-see came in the Brown Theatre, a much smaller hall where the audience sits close and every note can be heard. A cozy spot, in other words, that afforded the symphony and its most faithful fans a chance for a bit of close-up reunion.

Musical director Jorge Mester seemed to have the sense of that as he stepped on stage and noted that the first number of the evening would be “Three Dances from The Bartered Bride,” which the orchestra had performed in its very first concert in 1937. A lively skip-along kind of piece, and the orchestra was off and running … again.

So, how do they sound? Pretty good! And not too rusty after a year away. The notes touched cleanly and dynamics swelled and settled easily. Only a few times, though, was the orchestra able to create real dramatic tension. But that’s an ensemble skill that could improve.

The main problem with an orchestra reduced from 70 to 55 (besides throwing musicians out of work) is it skews the balance between strings and winds. For example, Friday night there were four French horns and three trombones — but just five cellos. That’s because most classical music is written with individual parts for wind instruments, but the string sections each play one part. So there’s a personnel cut. The orchestra’s winds did an excellent job of not overwhelming the strings, but the combo would sound better with 15 more fiddles.

The orchestra didn’t tire through Dvorak’s “Symphony No. 7,” though the music, itself, doesn’t go much of anywhere for 40 minutes. The “Seventh” is not the “New World,” but it is laced with rich chords at the end, and the orchestra shimmered through them.

For dessert, Mester added an unprogrammed number, again from the first Louisville Orchestra concert: a Johann Strauss waltz called “Roses from the South.” A thanks-for-coming bouquet.

But the highlight of the evening proved to be cello soloist Peter McCaffrey’s performance of Camille Saint-Saens’ “Cello Concerto No. 1,” a work designed to show off the virtuosity of the performer. McCaffrey, who sat first chair for the Louisville Orchestra before the shutdown, now plays with the Detroit Symphony.

McCaffrey skipped over the strings: broad low bowing, a melody in the middle strings, then tippy-toe right up to the top of the register. His finest moment might have been when he reached up the fingerboard by thumb and finger to find the highest “harmonics” notes — while diminishing in volume with each step up. Tip, tip, tippy-tip, and finally a tiny teep — that you had to hold your breath to hear. Perfect.

McCaffrey is just the kind of player the Louisville Orchestra must attract again. It wasn’t the best older players who fled the orchestra’s downsizing, but the best younger ones.

For info on upcoming concerts, go to louisvilleorchestra.org.