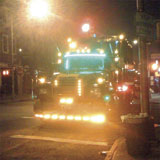 Deerhoof might as well be the jubilee house band for Smokey the Bear’s Smoke Out Bar & Chill. The level of fun in the room fuels the joy in their souls, but not in the typical definition. They record in the studio two notches above the recommended volume, true to their noise roots. But they’ve expanded outside the noise restriction, introducing trip-hop and dance within Breakup Song, their latest effort to party on. Satomi Matsuzaki, their distinctive, Japanese-tinged voice, makes the offbeat arrangements worthwhile. It also appears they’ve consciously written two songs entitled “Flower,” but this differs greatly from its early spastic counterpart. Closing with a textural treat, “Fête D’Adieu” — French for “farewell party” — jaunts on a funky, electro-twang mix of guitar and blips. Some call it going pop; Deerhoof calls it moving on.