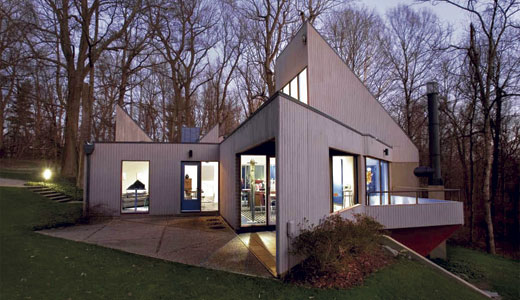 ‘The Leight House: The Home and Collections of Leonard and Adele Leight’
Photography by Ted Wathen, foreword and interviews by Peter Morrin. Butler Books; 88 pgs., $29.95.

While I’m not fond of the term “bucket list,” it does denote things yet to be experienced. My personal list includes the house Fallingwater by Frank Lloyd Wright, the Vatican’s Raphael Rooms, and the Musée des Arts Décoratifs in Paris.

In the Louisville area, there’s a house that has become an experience unto itself. But it’s actually a home, the residence of Adele and Leonard Leight, and not open to the public unless invited.

We can now “visit” their modern structure by way of the book “The Leight House: The Home and Collections of Leonard and Adele Leight.” The book’s splendid photographs are by Ted Wathen, who originally made personal copies for the Leights in 2008. The demand was such that Butler Books did an additional book printing for the public this year.

We are led through the house and art by the words of Adele and Leonard from their interviews with Peter Morrin. While the Leights are best known for their studio glass, they have also collected ceramics, paintings and furniture. Indices of the artwork and selected furnishings are included.

“I was looking at books on modern architecture in Europe,” says Adele, “and we showed (architect) Jasper (Ward) what we liked. He designed a three-story stucco house … Jasper then gave the project to Fred De Santo, recently graduated from the University of Kentucky School of Architecture.”

“The north/south axis of the house was designed to follow light through the day,” adds De Santo. “The house (built in 1968) was constructed to be a living museum; designed to admit light to feature their art, and at the same time focus on the views outside the windows.”

Adele says that at the time they built the house, they focused on collecting crafts and paintings. Works by Dale Chihuly, Lino Tagliapietra and Stephen Powell, to name a faction of their holdings, illustrate their more recent passion for glass.

They disagree slightly on their current collecting focus. “I am as interested in crafts and vessels as when we started,” says Adele, while Leonard adds, “My taste has changed. I am now more interested in glass sculpture.”

But no matter their decision, their enthusiasm is evident. When Morrin asked them, “Which is more fun, pursuit or possession?” Adele answered “pursuit” and Leonard said “possession.” Adele also added, “And this encompasses the whole story of pursuit and possession. We pursued and possessed, which finally made a collection.”

Since this is a private residence, their collections are placed throughout the house. The result is a livable interior that developed deliberately yet organically, as in the box of plastic forks placed on a shelf that also holds a woven basket and glass bowl. It is a home.

The Leights are generous with their art, money and, most importantly, themselves. This tour of their personal museum in book form is another act of generosity.