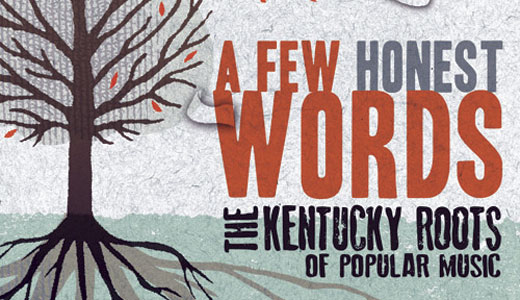 Jason Howard has been a big music fan since childhood. But he’s different from most kids from southeastern Kentucky hollers like his native Dorton Branch, because once Howard grew up, he got to spend time with some of his childhood favorites — like Dwight Yoakam and Naomi Judd — as well as some of today’s most popular and influential newer musicians from Kentucky, like Jim James and Nappy Roots’ Skinny DeVille.

Now a journalist, Howard has previously paid homage to his roots by co-writing the anti-mountaintop-removal book “Something’s Rising” (with Silas House). His latest book, “A Few Honest Words: The Kentucky Roots of Popular Music” (published by the University Press of Kentucky in Lexington), looks not only at the more obvious aspects of our region’s music — country, bluegrass — but also other genres less frequently associated with the bluegrass state, from hip-hop to indie rock.

His father was his biggest early influence, says the 31-year-old writer. Dad put his son in front of the family’s RCA turntable early on, exposing him to a varied and atypical selection of music from the Beatles to Barbra Streisand to the Nitty Gritty Dirt Band. Later, an older cousin turned young Howard on to hits of the modern day — Madonna, Prince and such.

But it wasn’t enough for Howard to just enjoy the music. He says he got an extra layer of value, of significance, from the fact that some of these favorites were from nearby: Loretta Lynn, from Butcher Holler; Yoakam, from Pikeville; even Billy Ray Cyrus, from Ashland. It’s something kids in bigger cities might not notice, but to Howard, who now lives in Berea, it was meaningful.

He’s taken his fandom and local pride to the next level with “A Few Honest Words,” profiling everyone from Mama Judd (who “talks of literature, science and her native Kentucky as she stirs the pasta”) to Ben Sollee, who reveals how he chose the cello as his instrument (at the age of 9, “I was all about gags back then, so I chose it because I could make fart noises”).

Howard is proud to merge the old with the new, treating Judd and Yoakam as reverentially as lesser-known talents like jazz pianist Kevin Harris (from Lexington, now a Bostonian) and folk-blues singer and activist Kate Larken, whose development has led her from Western Kentucky to the Virginia border and on to Louisville.

It’s important, Howard says, for people to know that there’s much more to Kentucky, musically and otherwise, than what Louisville native and longtime Los Angeles resident Leigh Watson, of the Watson Twins, summarizes as “Moonshine. The country bumpkin. The hillbilly. And married to your cousin.” The torchy indie-rock singers have struggled to balance their internal levels of urban cultural awareness and Southern heritage, living in heavily Latino and gay neighborhoods in California, afraid to be typecast as Kentucky clichés, but proud of throwing the best Derby party.

Musicians like the Watson Twins, Sollee and My Morning Jacket are making an impact, acting as traveling ambassadors of Kentucky’s many facets. While neighboring Tennessee, complete with their Nashville dream factory, might get a lot more of the fame and TV shows, Kentucky, as Howard writes, is more “a spiritual state of mind than merely a physical place of birth.” It is the farm life of Red Foley as well as the urban sounds of Lionel Hampton, Merle Travis’ coal-mining family struggles, “the slums/where we from” of Nappy Roots, and the suburban dreams of Jim James.

James told Howard that even though he has seen much of the world and lived elsewhere, “There’s part of me that needs Louisville, like I need to be there. There’s just something that I can’t even explain. Something spiritual.”

Howard will read from and sign “A Few Honest Words” Thursday at Carmichael’s.