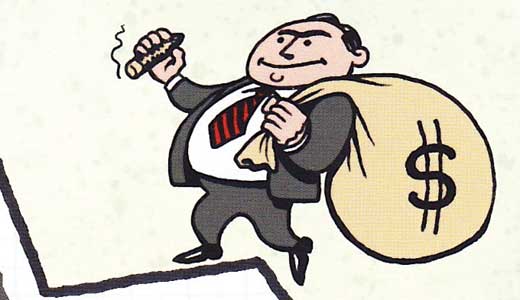 ‘Economix: How our Economy Works (and Doesn’t Work) in Words and Pictures’
By Michael Goodwin, Illustrated by Dan E. Burr. Abrams ComicArts; 304 pgs., $19.95.

If there ever was better timing for a book, I can’t think of it. Not only is the American economy sagging, having seen bubble after bubble burst, enormous amounts of national and consumer debt, and a small but vibrant uprising in the shadow of Wall Street, but it’s an election year. Of course the candidates must play lip service to the slow implosion of capitalism, what with oil companies reporting massive profits while graduates hoping for a good job — or any job — are increasingly crushed under the weight of student loans. Then there’s that increasingly draining war, of course.

But what, if anything, does the American public actually know about the machinery of the American economy and the engines of its growth? How did we get here? Certainly, one could begin — as I recently tried — with Adam Smith’s seminal “Wealth of Nations,” first published in 1776. No doubt, this is an enlightening, even unnerving book, laying bare the simple facts of capital, stock, rent, trade and currency. More than 200 years later, though, our own country, once largely agrarian in nature, has evolved into a monster, and for most of us, its language of the Dow is incomprehensible.

Trying to tackle Marx, Engels or John Kenneth Galbraith even is daunting. But Michael Goodwin has not only done this reading for us, in a small town in India no less, he has laid it bare in the form of a graphic novel. If this sounds at all ridiculous, I assure you it is not. I read the book in a single sitting — several of the best spent hours I’ve ever devoted to study. It’s a tour de force crash course in canned knowledge, and one that can get anyone up to speed in time for Nov. 5 elections.

Words, as anyone knows, thrown into the political arena get skewed, their meanings politicized and compromised. Goodwin gets to work with definitions — what is a capitalist? How does a bank work (or not)? From “laissez-faire” to “supply and demand,” terms many of us learned in passing in high school, are quickly contextualized. All of this is done, and rightly so, with a great deal of humor and self-deprecation. That said, this is also a book that refuses to pull any punches. Republicans, Democrats, Andrew Carnegie — none of them are spared.

The historical narrative, stretching from Dutch capitalists to President Obama, has a pointed way of demonstrating that history repeats itself, in often troubling ways. The clear links between Otto von Bismarck’s cynical socialism, the Italian fascistic “permanent war economy,” and Andrew Mellon’s insidious tax cuts and Great Depression bank bailouts (those banks sat on the money, too) swerve close enough to our current situation that one understands completely why we are doomed to repeat history.

The art, inked in straight black and white, takes on all the hilarity of caricature. Malthusian philosophy, which in some ways accounts for how the world economy left Africa literally starving, is handled with blunt humor, and without a bit of levity, much of the book’s topic would be indigestible and intolerable. At the very least, one puts down the book with a conviction and understanding that, with all due hope, will inform the reader and help them make the right choices come November.